Los Angeles, CA – Over a decade ago, a vision was shared by two like-minded souls from the Chicago and Los Angeles areas, who both had an undeniable influence in the early electronic music community. Their unwavering love and determination to act on behalf of the greater good of all has allowed them to finally bring this dream to fruition after one of the most pivotal, and challenging times in modern day history by creating Home Nightclub LA. The primary mission of this endeavor; to tighten the loosened fabric in the electronic music community by bringing people back “HOME”, to the undeniable sanctuary that is the dancefloor, especially after the Pandemic, while uniting people through music.

Aside from providing a positive, high energy dance environment with stellar talent and top rated DJs, the founders and production team at HOME Nightclub events are dedicated to giving back to their fellow humans by donating a portion of the profits from each event to a nonprofit organization, Sustenance, developed by one of the pioneers of house music, Jesse Saunders, which helps provide much needed musical education to our underprivileged youth. A very worthy cause indeed.

The incredible roster of talent, founder of HOME Nightclub LA, David King, has carefully selected along with the assistance of the HOME production team has been absolutely surreal, with the likes of Techno and house music legends like Grammy Award nominated producers and electronic music legends such as Eddie Amador, Roland Clark, Jesse Saunders, Steve Loria, Donald Glaude, Descent, VRDGO, Holly Adams, BB Hayes, Thee-O, Hector Merida (DJ HUGGIE), Mark Iracheta, Tommy B, DJ Reza, LiquorBox, Kameo, NonFiction, and Mr. Koolaid to name a few. The overwhelmingly positive, old school vibe the team has created, combined with some of the most talented artists in the EDM music events industry, make this event one the hottest new club in L.A. to get you ignited on the dancefloor for hours. Tommy B. (Las Vegas) graced the decks of HOME Nightclub LA back on July 9th 2021 with what everyone in attendance, including DJ Fergie, who came by straight out of Vegas’s Omnia and Hakkasan nightclubs, knew would be amazing. Tommy B’s high energy set included all brand new tracks which made the crowd go wild. Each night since opening, HOME Nightclub Los Angeles has been creating magical moments and people throughout the west coast are beginning to take notice.

Multiple Grammy nominee, Eddie Amador, alongside the heavenly voice of Coco Street, chose HOME to make the debut of their collaboration as the group “Nu Soul” on the night of July 2nd 2021. Their incredible experience that night, along with knowledge of the founders’ benevolent goals to unite through music and love, has inspired Eddie and Coco to write and produce a track in honor of Home Nightclub. When asked about his thoughts on this, founder David King stated with great emotion, “It is not only an honor, but a privilege to watch music history unfold before my very eyes. This is exactly what underground music is about! Bringing people together with positivity, love and unity at the forefront of all actions. The organic nature of what has transpired has been overwhelmingly beautiful.”

On Friday, July 30th headliner, Descent (Eyal Federman), who is another Grammy nominated artist with label associations that include RCA, Sony Records, Ultra, Release Records/Elements, Propulsion, Fragrant, and City of Angels graced the decks at HOME at a secret Downtown Los Angeles location that was handpicked to create those old school vibe. Descent’s incredible talent has also gained him a #1 spot on the Billboard charts and he has collaborated with the likes of Maroon 5, Justin Bieber, Beyoncé, Mariah Carey, Skrillex, Lil Wayne, Big Sean, French Montana, Niki Minaj, Future, Maroon 5, Miguel and many many others. Descent performed along with the cutting-edge style of known Los Angeles house music icon, A.J. Mora, and the highly dance worthy beats of L.A. native, Amanda Fults, who is traveling from Austin, Texas to celebrate her birthday at HOME Nightclub LA and perform for her hometown crowd for the first time since the pandemic. 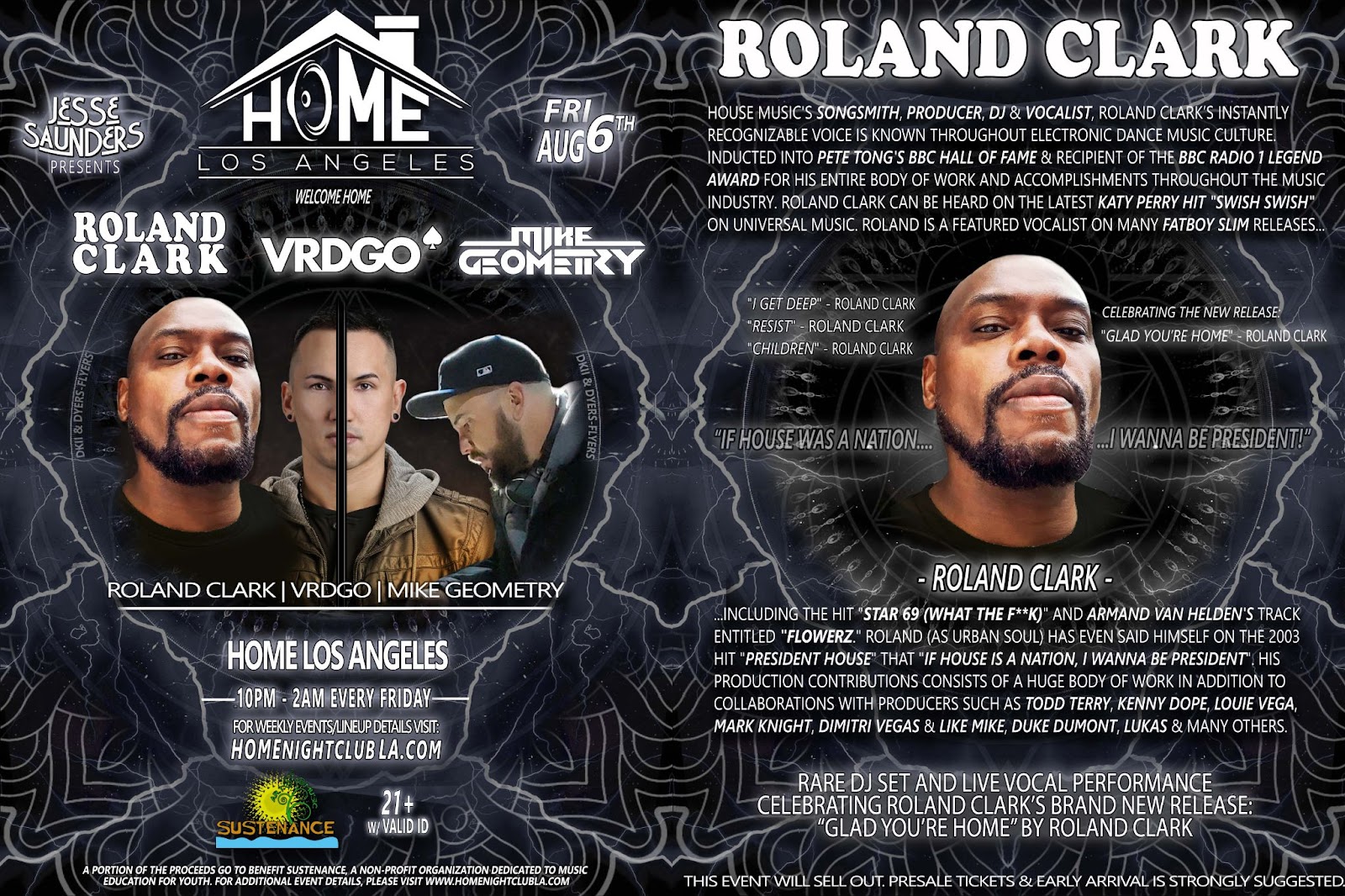 Legendary artist/DJ/Producer and vocalist, Roland Clark, widely known as “the official voice of house music” will be one of the most groundbreaking productions the staff at HOME has in store for electronic dance music goers yet. His vocals are easily recognizable and sampled by some of the top music producers in world with iconic hits like “If house was a nation, I want to be president”, “Star 69 (What The F**K)”, and, “I Get Deep”. This inspirational New York house music legend has also had multiple collaborations with the likes of Fatboy Slim, Duke Dumont, Louie Vega, Armand Van Helden and many more. On August 6th 2021, Roland will be welcomed Home for his first west coast performance in over 2 years at HOME nightclub LA. Synchronistically, Roland just so happened to have recently released an all new track titled, “Glad Your Home”, which he created to also welcome music lovers back HOME to the dancefloor after overcoming such turbulent times.

As if it couldn’t get any better, VRDGO, who have created several high-energy, beat-thumping hits that soared on the Beatport top 100 Electro/House Charts, will also appear on the lineup along-side Roland Clark that same night in Torrance, California. This multi-talent duo have some magical mixing skills and have been producing music and performing to crowds all over the world. Marcos and Anthony Verdugo, aka VRDGO, are signed to Blackhole Records (Tiesto’s Label), Armada Music, Tommy Sunshine’s Brooklyn Fire and many more.

The buzz is real! So many people have given glowing reviews and outstanding feedback regarding the vibe the HOME nightclub events create.

“You make it feel like HOME should be!! Thank You!!! And the team!!! I’ve been waiting for it to be like this for too long!! I thought cool people and cool music celebrated together in a great atmosphere was gone for good!! You proved me wrong: Thank You!” said Jon Stoll, who claimed that the HOME event he attended on Friday July 30th with Grammy Award Nominated Producer Eyal Federman, aka DESCENT, was the first time he truly felt the 1990’s old school vibe again. It is feedback like this that makes David King and his beautiful lady Nadia Leon pressing forward with their extremely talented team.

The HOME Nightclub events team is made up of a wide range of old school event producers, promoters, DJs, and music producers who all came from the golden age of the underground. This is the very reason why each HOME event creates the vibe that gives party-goers and dancers those old school, home-like feels.

If you are a fan of electronic music, a trip to HOME night club in Los Angeles is a must for your Friday night to do list. The epic lineup’s featuring some of the industries top talent have been on a whole other level, and the vibe is incredible with smiling faces and hips shaking. 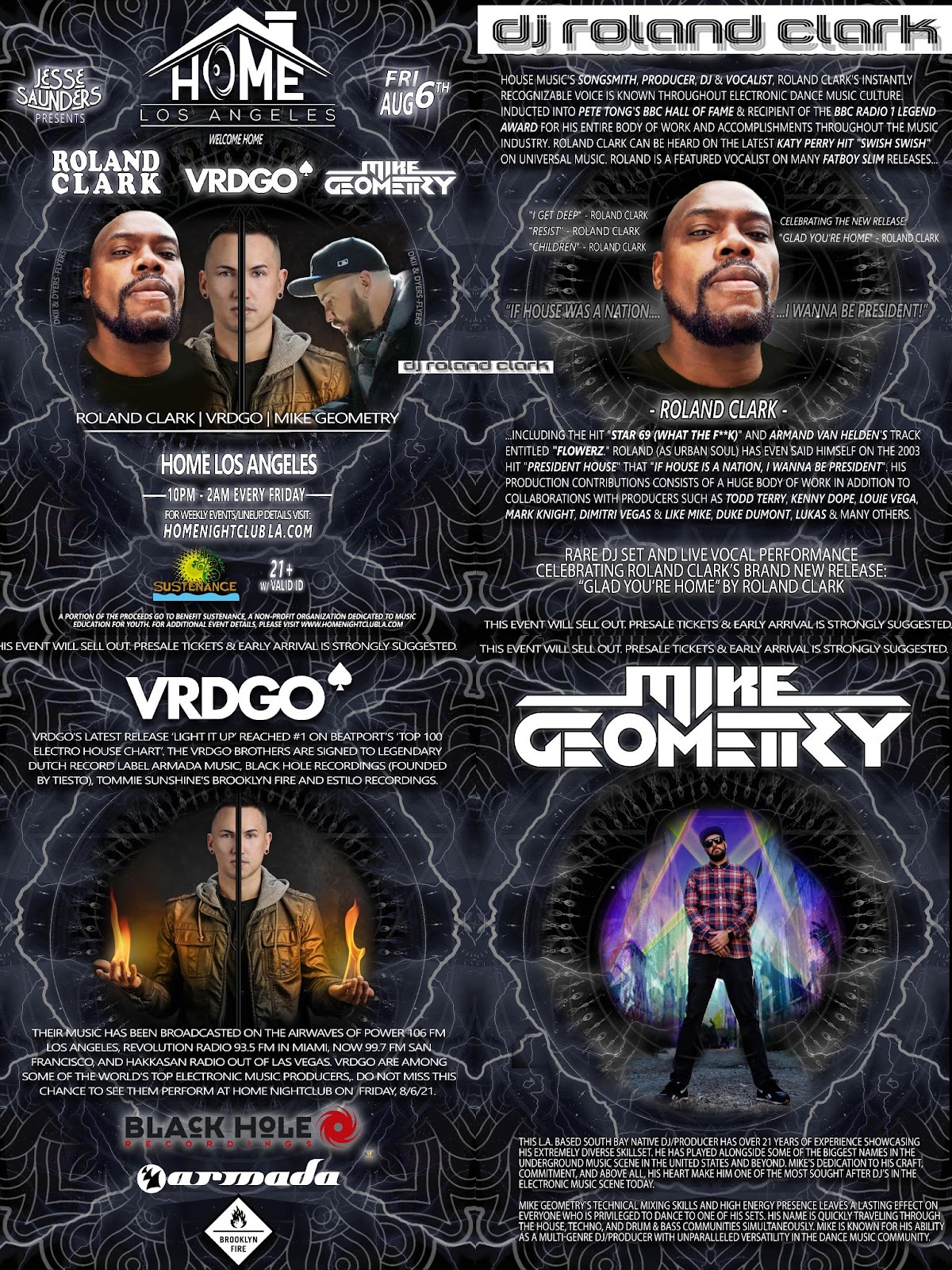