I would say that 2020 is a great year to get into Path of Exile. You have boundless content to explore, a strong community of people to ask for help, tons of created content to give you a head start and with Path of Exile 2 on the horizon – you are a bright future to look forward to. 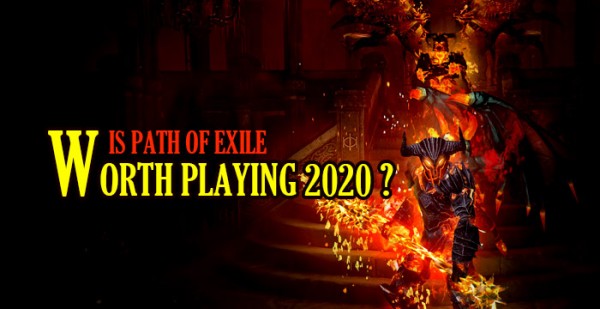 When looking at Path of Exile, you think to yourself, why would I spend my time playing a game that is from 2013 when there are newer games like Wolcen available?

Before we get into that, I do want to talk about myself a little bit. When it comes to Path of Exile, I am a relatively new player in terms of hours played. I started back in 2012-2013 during beta and played it a ton! I rolled a Templar and at the time lightning shields were all the rage and it was a fun build to play. But at the time there were only three acts and not really anything else to do, so I decided to take a break from the game. As of late, I decided to get back into the game and see what’s changed. The new Metamorph and Delirium leagues were the perfect time to jump back in, and apparently, I’m not alone on that notion because Path of Exile broke some personal records with over 200,000 players online at once!

So why am I telling you this?

Because this article was written to help those who have never played or played, but took a very long break, to see if the game is worth your time now. Is it a good time to get into Path of Exile or should you skip it? If you’re someone who plays PoE frequently, then this list might be somewhat of a recap for you.

This is a huge driving force for why Path of Exile is as successful as it is and why it’s continuing to grow. With a zero-price tag, there isn’t a risk to trying the game. You can download it to see if it’s something that holds your attention and if it does – leave it installed. If you find that the game isn’t your style, you can uninstall it with no downside other than a potential hit to your data cap for the month. This game offers so much for such a small cost that it’s just incredible and other games are modeling their monetization plans after Path of Exile.

Now with an absent price tag comes microtransactions, it’s hard to have one without the other. Path of Exile’s in-game store doesn’t sell gear, power or anything that affects your killing efficiency in-game, but it does offer convenience items. This help improve the overall game experience with popular things for sale like more stash tabs. All of the proceeds from the store go towards the studio, Grinding Gear Games and help them develop more content for Path of Exile.

When it comes to content, PoE has such a deep backlog of things to do that it’s impressive they have been able to keep the price of the game so low compared to other games in the genre that charge so much more for less.

Now if Path of Exile being free is the first part as to why it’s so successful, then the quarterly content updates known as “Leagues” are the second half. This game has set the tone when it comes to frequent, new content updates not only in its ARPG genre, but it has bled over into other genres as well with games like Division 2 adopting this system. It’s a strong system with a proven track record, instead of pushing out a big, box copy expansion DLC each year you instead push out bite-sized content every few months to keep the players satiated. However, this can be a double-edged sword as the developer must meet the fast-paced deadlines and produce a quality product or else they lose trust from their community.

So how do you accomplish this without burning out your dev team or running out of money?

Well, some dev teams don’t do this very well and will end up missing the mark on a season or a league, then fail to recover in the following updates because they are too busy focusing on fixing the issues from the previous one. Path of Exile doesn’t really have this problem. Sure, they have leagues that aren’t as good as others but for the most part, a lot of the stuff they release is well-received.

So here is how leagues work for those that are out of the loop. Leagues in Path of Exile are unique mechanics or themes that get added to the game in order to change things up that play a part in the story and endgame. Most of the time these leagues are fairly creative, and they help hide some of the more annoying aspects of the game like the need to re-level each time a league is released. So instead of seeing 100% of the same content each time you level up, you’re going to see 90% of the same content with the other 10% being made up of whatever league mechanics are present at the time.

Once the leagues are over, your characters who were part of that league are moved into the standard league and can continue to be played, however, they cannot participate in new leagues going forward.

Here is an example: The league before Delirium was Metamorph and I had a character during that time which I played halfway through the campaign. Once the Metamorph league ended and Delirium began, that character was moved into a Standard league and could not be used with the new Delirium content. This turns some people away and just know that you won’t be able to have the same character experience all the leagues.

This is definitely one of the more polarizing aspects of Path of Exile and that It’s passive skill tree that has over 1400 nodes within it; each one granting a bonus of some kind. When players open the skill tree for the first time and see it’s spider web-like structure, people either become immediately overwhelmed or excited to explore. This passive skill tree is one of the defining features for the game since it was revealed, is it the first game to do this? No. Final Fantasy X was the first game that I saw roll out a tree like this. Wherever they received inspiration, this tree is part of the engine that makes your character go, with tons of ways to help support the build you’re chasing. If you want to be a teleporting chaos archer? Go for it! How about a traditional Necromancer since that’s a really popular playstyle? Yep. You can totally accomplish that through the tree.

Players get a total of 123 points at level cap and that includes all the points from quests tucked away in story mode, so be sure to do those side quests as well. With all the possibilities and potential to build your own character within Path of Exile, you also have a high chance to build something that isn’t viable in endgame – and that sucks. So it’s highly, HIGHLY recommended that you follow a PoE build guide your first time through to understand what nodes to take, learn the PoE vendor recipes, and build knowledge around what to look for in a build. This game does not offer free, full resets to the skill tree and instead costs currency in the form of “Orbs of Regret” to refund your skill points. Because of this, it can be very punishing for first time players to get through the story if they make some wrong choices early on. Another thing to note, most people have a tough time due to the baseline difficulty of the game. Path of Exile is a hardcore ARPG, which means that even the story mode will give players some trouble if they aren’t careful enough – so make sure to watch your resistances and pick a skill you want to build around.

Path of Exile’s content backlog is enormous! There are so many systems you can spend your time on, things like Maps, Delve, Labs, and old league mechanics like Immortal Syndicate. You’re going to slowly be introduced to these as you progress through the story and these are great ways to break up your time playing the game so you don’t get bored. Feel free to take some time to explore these different systems to see if they are something you like – who knows? You might enjoy Incursions or Delve more than you thought!

With Path of Exile 2 on the horizon, now is the perfect time to jump into the game. There is going to be a changing of the guard and they will be passing the torch to Path of Exile 2. I don’t mean they will be shutting Path of Exile down, but PoE 2 is going to change up quite a few things so you don’t have to become a master of Path of Exile with these upcoming changes. With this knowledge, now is a good time to familiarize yourself with the game’s systems to be prepared for the sequel.

Take the game’s currency system for example: In Path of Exile you don’t have gold or currency that you spend and then gain an item, instead it uses a bartering system, you can buy PoE currency items. If you have gear you don’t want, you give it to a vendor, who then gives you some scraps, orbs or other materials that are used for other things. Inside vendors, you also have hidden vendor recipes, like giving a blue gem and iron ring to a vendor, they will give you a sapphire ring in return.

In addition to this, Path of Exile 2 is also making the game more beginner friendly, they are changing the skill gem system and the passive skill tree, but we aren’t sure what those changes will be quite yet.

So overall, I would say that 2020 is a great year to get into Path of Exile. You have boundless content to explore, a strong community of people to ask for help, tons of created content to give you a head start and with Path of Exile 2 on the horizon – you are a bright future to look forward to.