Alzheimer’s Disease is an irreversible and progressive brain disorder, which destroys memory, thinking skills, and the capability to carry out the most manageable tasks. The Disease is the most common cause of dementia (a continuous decline in thinking, behavioural and social skills that disrupts a person’s ability to function independently) accounting for around 60–80% of cases.

The sixth-leading cause of death in the United States is Alzheimer’s Disease. On average, a person with Alzheimer’s lives 4–8 years after diagnosis but can live as long as 20 years, depending on other factors. 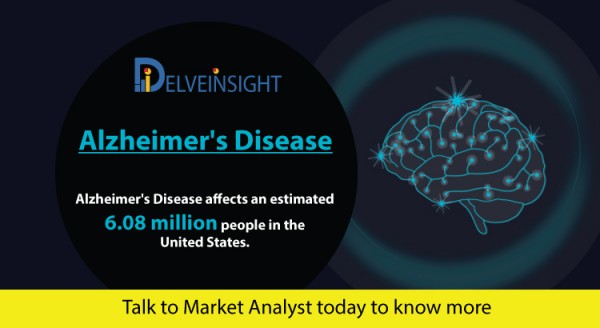 As per the National Center for Chronic Disease Prevention and Health Promotion, an estimated 5 million Americans, who are aged 65 years or older, had Alzheimer’s Disease in 2014. This is projected to nearly triple to 14 million people by 2060.

There is no known cure for Disease, and present approaches focus on benefiting people to maintain mental function, manage behavioural symptoms, and decrease specific problems, like memory loss.

Though two categories of drugs are approved for Alzheimer’s Disease treatment are cholinesterase inhibitors and partial N-methyl D-aspartate (NMDA) antagonists.

The mechanism of Cholinesterase inhibitors is by raising the level of acetylcholine; a chemical is taken up by nerve cells to communicate with each other and is vital for learning, memory, and cognitive functions.

Partial N-Methyl D-aspartate (NMDA) antagonist includes memantine. Memantine (Namenda) is used to treat moderate-to-severe Alzheimer’s Disease. They may benefit by reducing symptoms and help with some behavioural issues. However, these drugs do not change the underlying disease process. They are useful for some but not all people and may help only for a limited time.

The FDA has also approved Aricept and Namzaric, a combination of Namenda and Aricept, for the treatment of moderate-to-severe Alzheimer’s Disease.

Some of the key players in Alzheimer’s Disease market at a global level are as follows:-