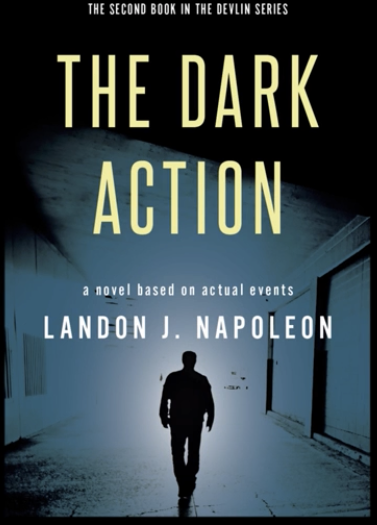 “The Dark Action” by Landon J. Napoleon
To introduce the world to the second book in the Devlin Series “The Dark Action” in a fresh new way, a brand-new film noir trailer for the book has been released.

Sep 23, 2021 – “The Dark Action” by Landon J. Napoleon is the highly anticipated second installment in the ever-intriguing Devlin Series. In a fresh way to introduce the world to the second book in The Devlin Series, a film noir trailer for the book has been released that can be seen here.

A spokesperson while speaking to the media shared the book synopsis. In his own words “It’s 1983. And a wrongful death case looks like murder. When the police discover a federal bank examiner dead on a deserted city street on Christmas Eve 1983, there’s no evidence, no leads, and no suspects. Street-smart lawyer Connor J. Devlin, now a decade-plus into his outside-the-lines career, reluctantly takes up the case. We follow the trials and tribulations of uncovering the truth.”

Readers who love smart legal procedurals won’t want to miss the second installment in the ever-intriguing Devlin Series, The Dark Action by Landon J. Napoleon. Napoleon deftly partnered with a premier attorney whose career has spanned 6 decades of cases and who the main character and cases are loosely based on.

Set in politically diverse Arizona, this clever latest installment is filled with mystery and intrigue.  To find answers, Devlin enlists the scary-smart and tenacious Sloane Monae, a former college volleyball player, and an ex-cop turned private detective. As the new duo start pulling the threads of the case, they find themselves equally intrigued with each other. They also unwittingly stumble into the savings-and-loan debacle of the 1980s, one of the biggest financial scams in American history. And those running the far-reaching fraud will stop at nothing to protect their ill-gotten gains. The Dark Action is available on Amazon.

The Dark Action by Landon J. Napoleon has been garnering praise from some of the top critics and magazines.

“Meticulous… The core of the story is procedure, and on that front Landon J. Napoleon excels. depth of knowledge regarding legal matters… lend this procedural a refreshing, real-world feel that seasoned mystery readers will appreciate.” — Publishers Weekly

“I loved this book, which is unique in the way it accurately portrays the process of being a trial lawyer outside the courtroom. I read a lot of novels in this genre, and this was right up there with the best. Can’t wait for volume 3.” — Jeffrey Leon, past president American College of Trial Lawyers

“Landon J. Napoleon has nailed it with rapid-fire and intriguing plot development wrapped in crisp dialogue. The book sharply illuminates the truth all actual trial lawyers know universally: justice is won or lost long before the judge ever swears in the jury… won or lost in the dramas and drudgery of indefatigable investigation and preparation with the inevitable set-backs awaiting. A riveting work.” — A. Clifford Edwards, president (2019-2021) International Academy of Trial Lawyers.

To watch the trailer and book your copy of “The Dark Action” by Landon J. Napoleon visit https://landonjnapoleon.com/2021/09/01/its-1983-and-a-wrongful-death-case-looks-like-murder/.

About The Devlin Series

The “Devlin series” of novels are works of fiction based on the actual career arc of a prominent trial attorney, starting in 1970. In all instances, the names, certain facts and legal situations are altered to protect real identities. The end result is fictitious works based on real events and cases. However, references to pop culture, music, events, politics and various court cases and rulings are all historically accurate, including in most instances the actual names of the lawyers, politicians and principals involved in those events.