Wake Up! Music announces the arrival of the ET Boys (named Tacboy and Sharkeyes). Born in Chicago but hailing from Florida, Tacboy takes lead as the vocalist and lyricist, while Sharkeyes writes and composes the tunes. 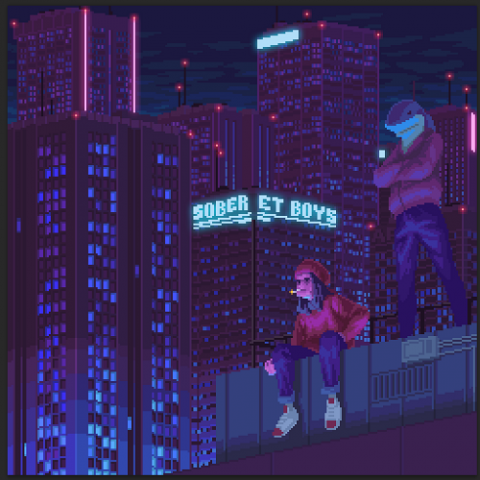 The ET Boys grew up in a home where dancers, musicians and all music were present. From sitar sounds in utero to the deep rhythms of Flamenco, they were babies when they first were on stage with their mother, House Vocalist and Wake Up! Music Record Label owner, Pepper Gomez. Formal piano, guitar and drum lessons ensued, and now the home is filled with the sounds of the ET Boys music.

During their recent stints in academia, something remarkable happened. Sharkeyes began to share songs he was writing with Tacboy who then composed the vocal melodies and lyrics to the track. A prolific partnership was born and in less than two years, they had amassed over 30 songs, which resulted in their first 7 song album ready to release.

Tacboy, a signed model for the top modeling agency in the world, IMG, sings with freedom and a look that evokes the channeling of Jim Morrison. He is mysterious and the poetry flows out of him effortlessly as he plays with the music – often on the first take. He is the front man who can mesmerize both with his voice and his looks, not to mention his lyrics.

Sharkeyes provides all the tracks for Tac to create upon, and his tunes are distinguished by a variety of influences, his own personal drum beats, and interplaying melodies.

With their first release, “Sober,” the ET Boys position themselves to rise in the world of Pop. Fun and catchy while also lyrically deep, this is a song of the times and begging for repeat. This release of “Sober” comes off of the blazing path of the charting hit “Oh My Heart” featuring vocals from Tacboy and Pepper Gomez.

“These sounds can not be forced into creation but rather are born from the bonds of brotherhood,” states Sharkeyes. This is young, fresh, nu music – the ET Boys Nu Pop sound.