Kertrina Dauway, Founder of You Can Live Again has announced that the inaugural You Can Live Again Brunch and Awards Announcement will be held May 22 at the world-renowned House of Blues in Dallas, Texas. The brunch and awards event allows participants to celebrate award nominees, allowing them to glean from their experiences. 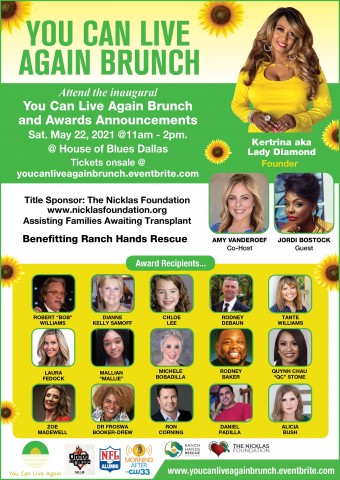 Speaking about the motivation behind the You Can Live Again concept, Kertrina had this to say, “I believe that no matter what you’ve gone through You Can Live Again and our award recipients are true examples of this! Their courage to move on and impact lives will be celebrated on May 22! ” At the awards ceremony, there will be panel discussions and stories on living again and how the nominees continue to thrive in 2021 along with a delicious brunch!

The You Can Live Again Brunch and Awards is an inspiring concept providing empowering stories from those who have moved beyond problematic circumstances in their lives to progress and achievements in their respective careers and lifestyle. The event, according to its founder, Kertrina, will equip participants with the motivation to thrive in 2021 and life.

There will be special performances by Nicholas David of NBC’s The Voice and singer/actress Rachel Webb. 2x NFL Super Bowl Champion and former Dallas Cowboys player, Tony Casillas and NFL Alumni, Mike Scooter Magruder of New England Patriots and San Francisco 49ers will be in attendance also. The event will take place on Saturday, May 22 from 11 am – 2 pm. This will lead up to the awards YCLA gala that will take place Saturday, Oct. 2, 2021.

The event is sponsored by The Nicklas Foundation (www.nicklasfoundation.org). Partners are; NFL Alumni, Ranch Hands Rescue, CW33 Morning After, Helping Hands and House of Blues Dallas. Tickets for the event are on sale at www.youcanliveagainbrunch.eventbrite.com to book seating at the inaugural You Can Live Again Brunch and Awards announcements.

Kertrina Dauway (also known as Singer Lady Diamond) conceived the You Can Live Again concept while growing up. She encountered many individuals from all walks of life facing challenges and wanting to take steps to “live again”. After recovering from low self-esteem she began empowering women to believe in themselves. She also began helping business owners in the DFW area pick back up their momentum in business practices.

Kertrina has an extensive background in business and entertainment relationships and continues her partnerships with the largest entertainment company, Livenation, and Fortune 100 Company. She has been featured on numerous occasions on Daybreak, NBC 5, CBS 11, and Fox 4 news as well as produced her television show. She has worked with Tyra Banks, Wynonna Judd, COMMON, Raelynn and the like.