Rosacea is a characteristic condition that affects the skin by causing facial erythema or redness. Around one in 10 people in the world is affected by rosacea.

How has Rosacea impacted people’s lives?

Some of the key facts of the report

How will Disease transform Rosacea Market?

The current therapeutic landscape of Rosacea can be divided into four major categories based on the route of administration and the approved usage for the condition. These are topical retinoids, topical antibiotics, oral-tetracycline class antibiotics (TCAs), and oral retinoids.

Among Topical therapies, topical retinoids mainly include Tretinoin, Tazarotene, Adapalene, and Clindamycin/tretinoin, and several others are used to reduce erythema, papules and pustules, and telangiectasias. Among these, Tretinoin has the lowest cost and most commonly prescribed topical retinoid, accounting for the majority of the population.

The key driver for the surge in Rosacea market size is the expected launch of emerging therapies and increasing Rosacea prevalence. 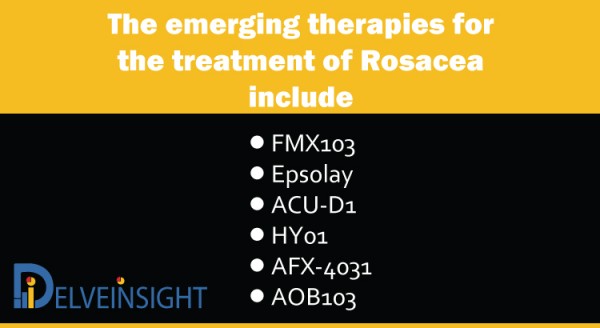 The dynamics of Rosacea market is anticipated to change in the coming years owing to the expected launch of emerging therapies during the forecasted period of 2020‒2030. There are presently several Rosacea emerging therapies focused on the treatment of Rosacea that includes, FMX103 (Foamix Pharmaceuticals), Epsolay (Sol-Gel Technologiesl), ACU-D1 (Accuitis), HY01 (Hovione Scientia Limited), AFX-4031 (Afecta Pharmaceuticals), and AOB103 (AOBiome).