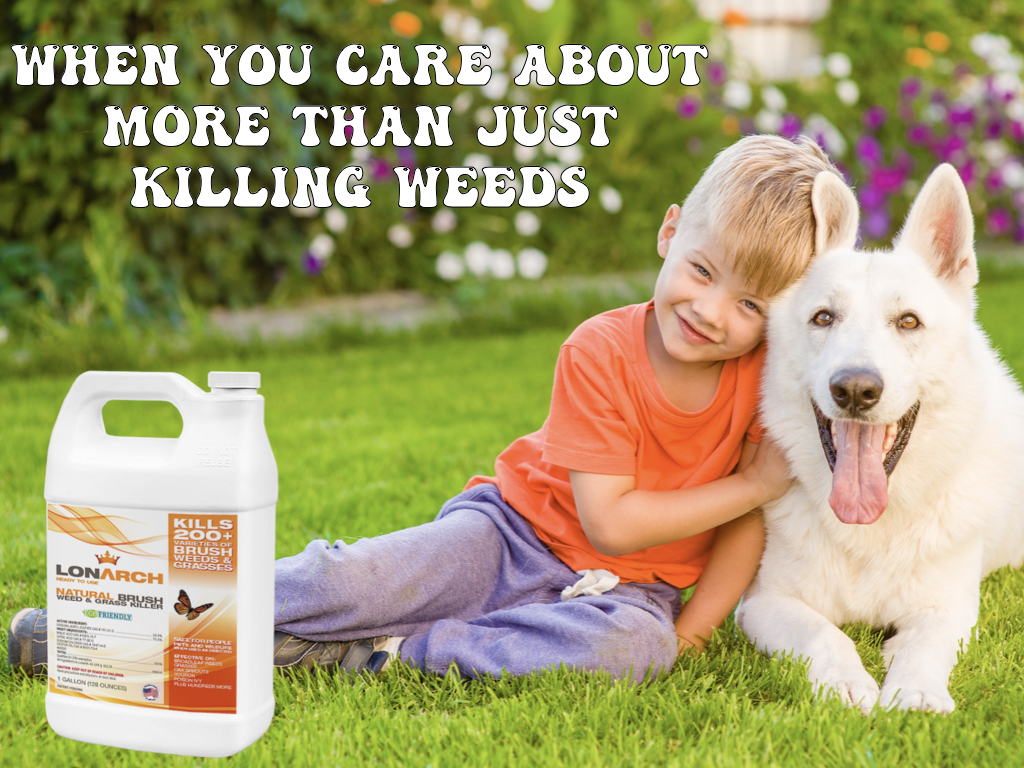 When you care about more than just killing weeds
Lonarch is an eco-friendly, non-selective, contact herbicide that kills over 200 varieties of brush, weeds, and grasses. Lonarch will not harm people, pets, and wildlife when used as directed and since it qualifies for the EPA 25b exemption as a minimum risk pesticide, it can be safely sprayed around schools and playgrounds. Lonarch is a safe and effective alternative to glyphosate.

BAYER TO ELIMINATE ROUNDUP FROM US LAWN AND GARDEN MARKET BY 2023: A new non-toxic herbicide seeks to fill the shelves that Roundup is vacating. Lonarch is an eco-friendly, biodegradable, herbicide that is safe for people, pets, and wildlife when used as directed. Made only with ingredients that the EPA has deemed “minimum risk”, Lonarch is an effective alternative to glyphosate and other toxic herbicides. Why is a non toxic herbicide important?

According to the IARC and World Health Organization, Glyphosate and Paraquat have a probable link to cancer and Parkinson’s disease in humans. Since Lonarch qualifies for the EPA 25b exemption, it can be sprayed around schools and playgrounds and will not harm your pets (when used as directed). Lonarch can be sprayed around shorelines and won’t harm aquatic life or animals such as cattle that enter the water. Lonarch comes in 32 oz concentrate, 1 gal concentrate, 2.5 gal concentrate and 1 gal read-to-use.

Lonarch is a contact herbicide and works by stripping the waxy surface of the leaf thus allowing the other ingredients to dehydrate and kill the plant. Since it doesn’t translocate through the roots, Lonarch will not kill vegetation not intended for elimination.

“Based on the wide range of vegetation controlled in this study and the nature of non-selective herbicides, it is highly probable that the manufacturer’s claim to kill 200 plus varieties of flora is quite valid. The active ingredients found in Lonarch appear to be another useful tool in land management where control of weeds by burn down herbicide spray is desired.”