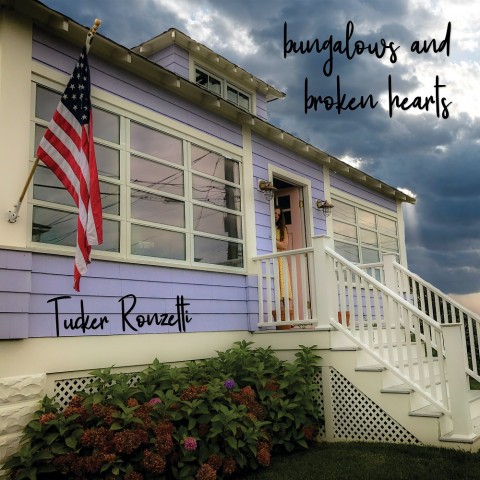 Tucker Ronzetti is a talented new artist who grew up in Northern Virginia before moving to Miami.  His unique perspective and zest to understand human emotions allow him to write songs that are meaningful and soulful.  In his earlier released single, “Thoughts and Prayers,” he talks about mass gun violence, while in his upcoming album, bungalows and broken hearts, he focuses on lost love described through characters who invoke curiosity among listeners.

In this exclusive interview, Ronzetti talks more about his upcoming album and his journey so far.

Tucker Ronzetti: I grew up in Fairfax Station, Virginia, where I had all sorts of jobs as a teenager, from construction work to wood stove installer to chimney sweep.  During those years I fell in love with the guitar, which I taught myself.  I ended up in Miami where I played with bands called the Remaindermen and Carnival Haggis, covering classic rock and blues.  We all had working lives and played mostly just to enjoy the experience of making music together. Then, a few years ago, I left my job and began devoting myself to songwriting while I drifted around the world a while.  Now I still play with some of my bandmates as well as solo, and split time between Miami and a small Jersey Shore town called Manasquan.

Tucker Ronzetti: I suppose some become musicians because they want to be.  I feel like I’m a musician because I have to be.  It began with a teenage crush for the guitar, as serious as any young love can be.  That matured into songwriting, a profound need to describe feelings we all share.

Interviewer: Who are the artists you admire the most?

Tucker Ronzetti:  My greatest heroes are the songwriter/poets like Bob Dylan, Bruce Springsteen, Paul McCartney and Willie Nile, whose traditions are now carried by musicians like Jason Isbell and Jack Johnson.  As a guitarist, I’ve always admired the innovation of Jimi Hendrix, and Jimmy Page, Eric Clapton and Dickey Betts for their blues and melodic riffs.

Interviewer: How would you describe your songwriting method?

Tucker Ronzetti: I write poems and they become songs. When I write, I explore feelings or themes about the human condition and develop them through verse, often using a story or a situation.  I try to express universal truths, and to share the whole range of our emotions, from despair to joy.  I’m still amazed how much can be expressed in a few minutes.

Interviewer: Tell us about your upcoming album “bungalows and broken hearts”.

Tucker Ronzetti: bungalows and broken hearts focuses on lost love. Its characters face questions: What happens when someone gives up her home, her family – essentially gives up everything – for love, and that love just doesn’t last? How would a man feel when he sees his woman with a broken lip? After a breakup, should someone be happy at least to have had a chance at love? Isn’t true love supposed to last forever? There are no answers but the songs themselves.  The tunes range from the dramatic to the lighthearted or even comic, like “Born for the Beaches.”  And the arrangements are diverse, too, from the full band with electric guitar and Leslie organ to as simple as solo acoustic guitar and harmonica.

Interviewer: What are the other songs you have released?

Tucker Ronzetti: The day after the shootings in El Paso and Dayton, I wrote a song about mass gun violence that I released as a single called “Thoughts and Prayers.”  I tried to relate a feeling I think many share, that we are helpless to prevent this kind of violence, and so are terribly frustrated.  I also earlier released the solo acoustic “God in All Things,” included as a remix on this album.

Interviewer: What are your goals as a music artist?

Tucker Ronzetti: To express the truths we all share, and end our loneliness.

Listen to music by Tucker Ronzetti on his official website tuckronzi.com.