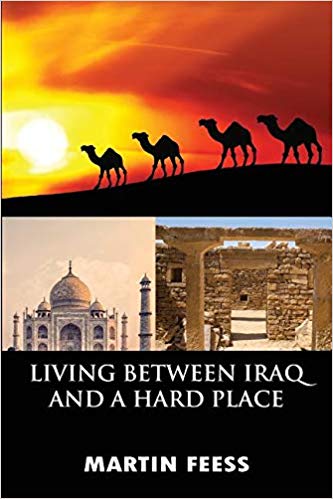 Phoenix, Arizona – October 7, 2019 – Iraq is a war-torn country, and the US is mainly responsible for such a state in the Arab country – but Martin Feess @ Marty had a different experience in Jordan, and the experience is immortalized in “Living between Iraq and a Hard Place: Peace Corps Volunteers in Jordan, 2005-2007.” Marty Feess terms his Jordanian experience a real-life twenty-first-century adventure where an American couple, that is his wife and himself, had the luxury to traverse through for a couple of years.

In the two years, Marty and his wife Karen have basked and submerged in the Arab-Muslim culture, embracing the attributes of Jordanian culture and gaining enough experience of a lifetime that’s inscribed in the memoir “Living between Iraq and a Hard Place: Peace Corps Volunteers in Jordan, 2005-2007.”

“Living between Iraq and a Hard Place: Peace Corps Volunteers in Jordan, 2005-2007” is written for the general public – it makes for an insightful and intriguing reading experience. When asked further about this memoir of him, Marty Feess says, “This book is an account of the experiences and thoughts of Peace Corps volunteers in Jordan during the tensest years of the Iraq War, including the time of the execution of the dictator Saddam Hussein.” The memoir has intense moments and a storyline that grips readers in a quick clasp.

This book is a window into the thinking of the people in Jordan. Some of what they think is surprising, much is enlightening. Attitudes and events about the Israeli-Palestinian and Sunni-Shia conflicts are elaborated. Stories of the travels and adventures of Peace Corps volunteers are sometimes humorous and always entertaining.  “Living between Iraq and a Hard Place: Peace Corps Volunteers in Jordan, 2005-2007” is a mix of all the happenings in the Middle East that also has its focus on how people there are more alike to the rest of humanity than different.

Martin “Marty” Feess is a retired teacher with a Ph.D. in history and a keen interest in world cultures. He served in the Peace Corps twice: Jordan, 2005-2007, and Albania, 2013-2015. He has also lived and taught in Vietnam and on the Navajo reservation. He has written four books.