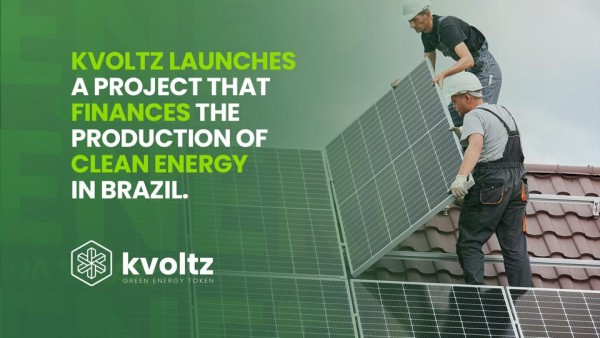 Brazil – January 24, 2023 – Kvoltz, Green Energy Token is a cryptoactive that besides bringing income in the financial market, also encourages sustainability. This is because the KVZ coin, in the physical world, is linked to a photovoltaic energy production plant, currently considered a source of little impact on the environment.

The first sale of KVZ took place in September last year, but transactions were limited to a group of pre-selected investors. Now, those interested in acquiring the currency can simply access the site kvoltz.com.br. There one can connect to the wallet and make the purchase via pix. At this stage of sales the coin costs $0.06 and the minimum investment is $100, equivalent to more or less 519 reais, depending on the daily exchange rate of the dollar.

A booming market, as Brazilians have increasingly turned their attentions to the crypto world. According to a report released by the IRS, the number of investors in the last year in the country grew by 68%.

In line with this, fintech will soon be in one of the largest managers of launches in the crypto market worldwide, BSC PAD, a platform linked to the Binance exchange. It works as a select group of investors and to be part of it, the user needs to pay an amount, like a quota, to then be able to buy the tokens. To participate, it is necessary to have an invitation, which guarantees greater secrecy and security in the negotiations. According to Jacson Maçal, CKO at Kvoltz, all these steps to participate in the BSC PAD increase the credibility of the transactions. “All the projects that are listed on this platform have sales success in a short period of time, in up to two weeks it is possible to see a large collection.”

Launch Schedule. To ensure the token’s valuation, a launch schedule was developed; now, the fintech is in the Private Sale stage. In this phase, the leverage is around 30%. Soon we will announce the date of the next stage, the Fair Launch.

Important details. The Northeast was chosen to house, initially, the largest number of solar power generation plants. This is because, according to the Brazilian Solarimetric Atlas survey developed by the National Institute for Space Research, INPE, it is the most favorable region in the country for the activity, since it has the highest average value of the total daily horizontal global irradiation in Brazil. The Northeast receives an annual average of more than 310 days of sunshine per year, which represents more than 10 months.

The first photovoltaic power generation plant is in the city of São José de Mipibu, in Rio Grande do Norte, and has a capacity of 112.5 kW. Bonuses with energy generation. Investors who own KVZ will receive at least a 2% bonus on the energy produced per year in kW/h, that is, it will be converted to physical currency (reais) based on the kWh tariff price charged in Brazil. So if the plant produces more energy, this growth will also increase the value of the token.

The electricity generated will be injected into the local utility grid and returned as credit to the registered micro and small companies, as well as to the token holders. The idea is also that this energy credit will be converted in the future into discounts on electricity bills. This measure is in line with law n. 14.300/2022.

Who is Kvoltz? The company was created in 2022, and is run by two CEO`s who decided to unite their expertise in the financial market, crypto, and solar energy. The office is based in the city of João Pessoa, Paraíba, and the team is formed by a team of collaborators.

The name. The word KVOLTZ came from the junction of the letter “K”, used to represent the number “1000” when talking about energy measurement (Killo Watts) and the word Volts.