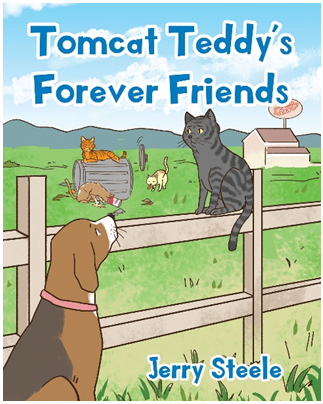 Set in Pennsylvania in the fall, September, “Tomcat Teddy’s Forever Friends” is a sequel to Jerry Steele’s first published children’s story, “Lady’s New World,” where he continues the story of bully Tomcat Teddy after he was driven outside of the split-rail fence. In the book Jerry Steele aims to teach the young readers the essence of true friendship and how building such a relationship is a two-way affair.

“Lady’s New World” was the introduction of Lady, a young Beagle who discovered Tomcat Teddy, after her boundless curiosity and delight led her to discover that there are other critters who also live in her backyard world. The book ended by Tomcat Teddy being chased away from the only world he has ever known, with all of the critters conspiring against him and rescuing Lady. The sequel to the first book offers readers another captivating piece as they learn of what becomes of Tomcat Teddy and his adventures after the conspiracy that led him out of the split-rail fence.

The back-yard bully was forced to adjust to a new life of not always getting what he wanted after being driven out of his back yard kingdom. While he was confident of still having a better life outside the fence, Tomcat Teddy quickly realized that things were not as rosy as he envisioned. Consequently, Tomcat Teddy found his way back through the fence. However, he did not have the best of comebacks as he is treated as an outsider, fueling jealousy in him after realizing that Rocky Robin was getting a birdhouse.

Tomcat Teddy now sees all of the critters he first met in “Lady’s New World” a bit differently. He discovers what true friendship means to them. He now knows what he must do to earn their trust. The climatic scene of this charming young children’s story comes when, with his pride and arrogance gone, former bully Tomcat Teddy is welcomed back into the fold, by Lady and the other backyard critters. Tomcat Teddy’s come to realize that his best life is right here, now that he’s back on the other side of the fence, with Lady, and all of the rest of his forever friends.

Tomcat Teddy’s Forever Friends” will be available in paperback and digital formats for lovers of children’s fiction across the globe on (date to be announced), for (price to be announced) through Christian Faith Publishing.