According to DelveInsight, the total prevalent population of Interstitial Cystitis in the Seven Major Markets was approximately 8,517,779 in 2017.

Interstitial Cystitis can occur at any age, including during childhood, but is most common in adult women and men. About twice as many women are affected as men. 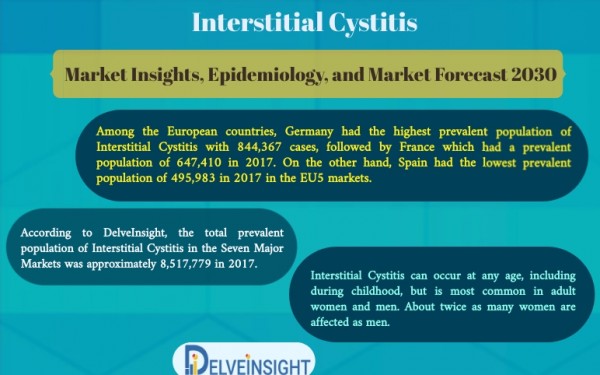 The report gives a thorough detail of Interstitial Cystitis market trend of each marketed drug and late-stage pipeline therapy by evaluating their impact based on the annual cost of therapy, inclusion and exclusion criteria, mechanism of action, compliance rate, growing need of the market, increasing patient pool, covered patient segment, expected launch year, competition with other therapies, brand value, their impact on the market and view of the key opinion leaders.

Drugs Uptake section helps in understanding the drugs with the most rapid uptake, reasons behind the maximal use of new drugs and allow the comparison of the drugs on the basis of market share and size which again will be useful in investigating factors important in market uptake and in making financial and regulatory decisions.Key emerging therapies in the Interstitial Cystitis market include LP-08, SI-722, KRP-116D and many others.

Some of the key companies in the Interstitial Cystitis market include Lipella Pharmaceuticals, Seikagaku Corporation, Kyorin Holdings and many others.