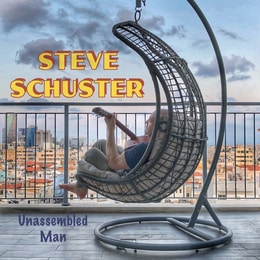 “You could teleport back to the 60’s and this wouldn’t be out of place in that era of game-changing music,” said A&R Factory’s Llewelyn Screen in his review of Unassembled Man. “This is ear-food for consumption that won’t make you sad but instead do the opposite and inspire you.”

With a day job as CEO of a technology PR agency, Steve recorded Unassembled Man over the course of the past three years, spending a scant three hours each week at the Pascarella Multimedia recording studio. The album was mastered in the skilled hands of Miles Showell at Abbey Road Studios – as a point of reference, Showell was also responsible for mastering the 50th anniversary deluxe edition of Sgt Pepper’s Lonely Hearts Club Band.

“My goal was to create an album experience that carries listeners on a thought-provoking journey across an enriching emotional landscape,” said Steve Schuster. “I set my standards for lyrics, melody and production exceedingly high, and I’m never satisfied until I’m confident each and every song can delight and inspire my fans.”

The songs found on Unassembled Man span a variety of imagery and topics, but two also stand out as political statements for today’s troubling times. “One Lonely Voice” reminds us that the most powerful weapon that we each possess is our voice and our vote. “Daylight Up Ahead” portrays the widespread anguish of shifting gears between Presidents Obama and Trump, observing that “The mob has won” but promising there is always hope ahead of us – the song concludes with a “Hey Jude” style outro comprised of a raucous 34-voice choir featuring Steve’s family and friends, including his 2 year old grandson.

One unique instrument found on Unassembled Man is the ancient “Kudu Horn Shofar” which Steve plays on the song Masada. The shofar, mentioned multiple times in the Old Testament Hebrew Bible, is the horn traditionally sounded on the Jewish High Holy Days. Masada is a Roman-era stone fortress in Israel, located high above the Dead Sea. In the song, Steve chronicles the fateful events that occurred in the year 73 A.D. from the anguished perspective of the last Sicarii rebel standing before the Roman legions broke through Masada’s walls after a two-year siege, only to find the 960 rebels had chosen suicide instead of enslavement.

Unassembled Man is published by Steve Schuster Songs LLC and is available as a CD and on all major streaming platforms. At Steve’s insistence, manufacturing and packaging for the album achieved carbon neutrality.

For more information, promo requests, or to arrange an interview, contact Steve Schuster at steve@rainierco.com, +1-508-868-5892, www.steveschuster.com