MarketsandMarkets™
The infant formula ingredients market is estimated to be valued at USD 16.7 billion in 2019 and is projected to reach USD 25.5 billion by 2025, at a CAGR of 7.3% 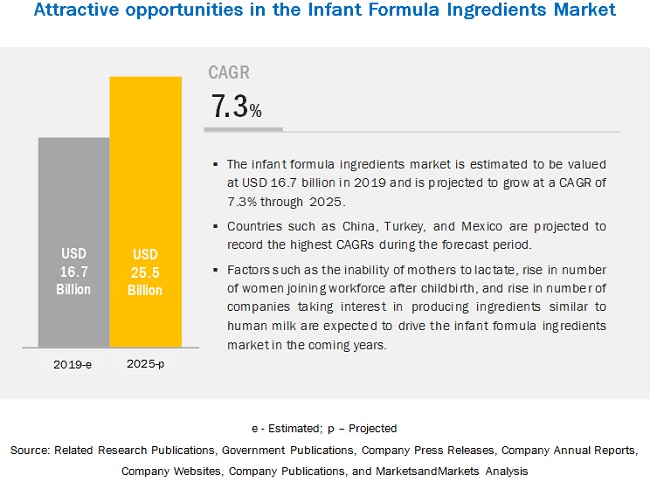 The liquid & semi-liquid segment is projected to record the fastest growth during the forecast period.

Oils & fats are the most widely used liquid and semi-liquid ingredients for manufacturing infant formula. The liquid & semi-liquid segment is expected to exhibit high growth prospects in Asia Pacific. In Japan, liquid infant formulas are preferred owing to their convenience in emergencies such as natural disasters that frequently occur in the country.

The growing-up formula (12 months & above) segment is projected to record the fastest growth during the forecast period.

The growing-up milk (12 months & above) contains calcium, vitamin D, and iron, and mostly serves as a part of a balanced diet for infants. Given during the transition phase from infant nutrition to family food, manufacturers offering infant formula for this particular age group are expected to witness high growth prospects, especially from Asia Pacific.

Manufacturers involved in the infant formula ingredients market are consistently engaged in R&D to develop ingredients as per consumer’s expectations. In 2019, Nestlé (Switzerland), opened a new R&D center in Ireland. The company made an investment of USD 30.0 million for the same. The center will focus on developing products for infant nutrition. Arla Foods amba (Denmark), made an investment of USD 0.66 million for a project focusing on infant formula. The project investigated whether a diet with bioactive milk ingredients protects against gut inflammation which is of enormous relevance to improve infant formula. BASF (Germany) and GlycoSyn (US) formed a partnership with a focus on the area of infant nutrition. It involved the development and commercialization of human milk oligosaccharides (HMOs). In 2019, BASF launched its first HMO, PREBILAC 2’-FL for the infant nutrition market. Thus, the market is highly competitive, with a large number of key players involved. Most of these players are expanding their base in the market owing to its increased demand from various countries.

Fonterra Co-operative Group Limited (New Zealand) is one of the leading players in the dairy nutrition industry. It is a co-operative consisting of 10,500 farmers, who have expertise in the dairy industry. The co-operative offers various ingredient products, such as whole, skim, milk powders, whey concentrates, proteins concentrates, isolates, and blends, among others. The company operates through three segments, namely ingredients, food service, and consumer. Out of this, ingredients is the largest segment for the company and infant formula ingredients comes under this. It offers ingredients for infant formulas through its subsidiary, NZMP (New Zealand), a global dairy ingredients brand of Fonterra. The company has a significant presence in Asia-Pacific and South America.

Royal Friesland Campina N.V. (The Netherlands) is one of the world’s largest dairy companies and was formed as a merger between Royal Friesland Foods and Campina in 2008. It manufactures and sells products, such as dairy beverages, infant nutrition, cheese, and other desserts, and also exports its dairy products worldwide. Its customers include bakeries and catering companies; its infant nutrition ingredients and semi-finished goods are supplied to infant formula manufacturers, food manufacturers, and the pharmaceutical sector. The company operates through four business segments – consumer dairy, dairy essentials, ingredients, and specialized nutrition. The infant formula ingredient segment falls under the ingredient business of the company. It has offices in 33 countries and presence in Europe, Asia-Pacific, and Africa.