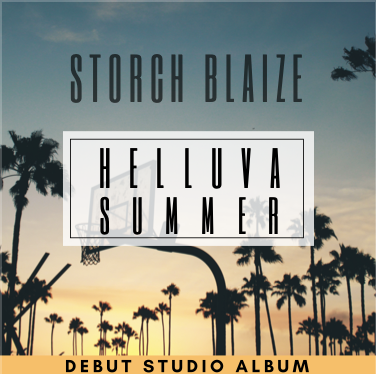 Music fans will be excited to learn of Storch Blaize’ latest album Helluva Summer launched recently. The dynamic DJ and music producer is no stranger to making great music and has several single releases to his credit but Helluva Summer is proving to be an album literally bringing down the house.

Storch Blaize has been consistently releasing hit singles in 2020 and Helluva Summer proves he won’t be disappointing fans in 2021. This time he has collaborated with numerous other Grammy award-winning and nominated recording artists like Jackie’s Boy, Jimmy Burney, and Stratosphere to deliver a masterpiece.

Hip Hop music is clearly evolving with the influence of EDM the latest trend. Among the numerous talents streaming out of the Indies, Storch Blaize stands out as one to look out for in 2021. With a steaming passion for music, Storch Blaize has found himself drawn to all genres of the art including hip hop, pop, EDM and House. His latest Album Helluva Summer was announced last year and has now dropped on all major streaming platforms.

In the title song Helluva Summer Storch Blaize’ signature style is evident with an influence of EDM that will appeal to all lovers of contemporary Hip Hop music. The melody and tempo are consistent and almost anthem-like but it is the sophistication of Storch Blaze’s skill as a songwriter that shines through with clean lyrics that gives his music a universal appeal.

Helluva Summer is an 11-track album that also features multi-platinum songwriter and Grammy Award winner Jackie Boyz, 2x Grammy nominee Jimmy Burney and Los Angeles Rap finest Stratosphere whom Storch Blaize has collaborated with in the past. This is one album that lovers of pop, R&B, Hip hop, House and chart music are thoroughly going to enjoy.

Storch Blaize, is an English performer, promoter, songwriter, and record producer. He is a veteran of the stage and has opened shows for Boyz II Men, Akon, and Model of the Universe. He grew up on 90s Hip Hop and Dancehall combinations of RnB music collections and was exposed to a mixed spectrum of musical influence which impacts his own music today. Storch Blaize explains how his emotive musical selections are now his own therapy. Speaking further about his music he adds:

“For me, it’s all about the vibe, a deep, hypnotic groove and feel-good atmosphere… playing infectious songs that get you tapping your feet and nodding your head without you realising it, regardless of genre, tempo, style.”

The multifaceted DJ and music producer is also a humanitarian and has launched his own charity foundation called Leaving No One Behind with a mission embodied by the slogan that No man, woman or child will be left behind.