IgA Nephropathy (IgAN), also known as Berger’s disease, is a kidney disease that occurs when IgA deposits build up in the kidneys, causing inflammation that damages kidney tissues. IgA is an antibody which is a protein made by the immune system to protect the body from foreign substances such as bacteria or viruses.

IgA nephropathy affects the kidneys by attacking the glomeruli. The glomeruli are sets of looping blood vessels in nephrons which is the tiny working units of the kidneys that filter wastes and remove extra fluid from the blood. The buildup of IgA deposits inflames and damages the glomeruli, causing the kidneys to leak blood and protein into the urine. The damage may lead to scarring of the nephrons that progresses slowly over many years. Eventually, IgA nephropathy can lead to End‐stage Renal Disease (ESRD). Which means the kidneys no longer work well enough to keep a person healthy.

The causes of IgA Nephropathy are not well understood. IgA Nephropathy is a response of the immune system to foreign substances. The immune response is what affects kidneys. People with IgA nephropathy have an increased blood level of IgA that contains less of a special sugar, galactose, than normal. This galactose‐deficient IgA is considered “foreign” by other antibodies circulating in the blood. As a result, these other antibodies attach to the galactose‐deficient IgA and form a clump. This clump is also called an immune complex. Some of the clumps become stuck in the glomerulus of the nephron and cause inflammation and damage.

As per the study conducted by Lafayette et al. IgA Immunoglobulin A (IgA) nephropathy is the most common form of primary glomerulonephritis, with a global incidence of at least 2.5 per 100,000 per year in adults.

In a study titled “Race/ethnicity and disease severity in IgA nephropathy”, conducted by Hall et al., IgA nephropathy is the most common form of glomerulonephritis (GN) worldwide. Approximately 20– 30% of individuals with IgA Neuropathy develop the end‐stage renal disease (ESRD) by 10–20 years following diagnosis. 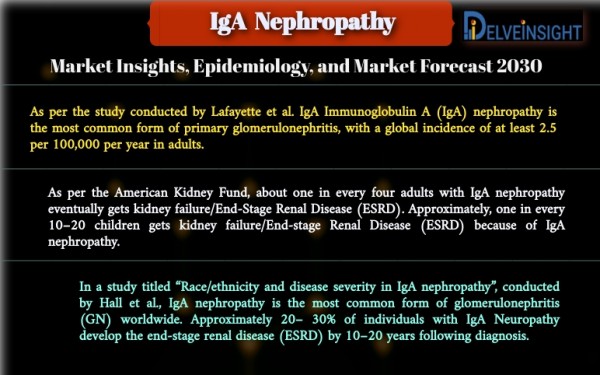 The report gives a thorough detail of IgA Nephropathy market trend of each marketed drug and late-stage pipeline therapy by evaluating their impact based on the annual cost of therapy, inclusion and exclusion criteria, mechanism of action, compliance rate, growing need of the market, increasing patient pool, covered patient segment, expected launch year, competition with other therapies, brand value, their impact on the market and view of the key opinion leaders.

Drugs Uptake section helps in understanding the drugs with the most rapid uptake, reasons behind the maximal use of new drugs and allow the comparison of the drugs on the basis of market share and size which again will be useful in investigating factors important in market uptake and in making financial and regulatory decisions.