The global hydroponics market size is estimated to reach USD 5.68 billion by 2025, exhibiting a CAGR of 22.52% from 2019 to 2025, according to the new study conducted by Grand View Research, Inc. The adoption of smart farming technologies, such as vertical farming, which has helped the evolution of hydroponics, is expected to spur the market growth. Continuous improvements in hydroponics technologies and introduction of innovative, state-of-the-art technologies, including environmental and temperature sensing, remote growth monitoring, and automatic nutrient reading, is likely to fuel the demand.

Based on type, the hydroponics market is segregated into aggregate systems and liquid systems. The aggregate systems segment is projected to continue holding the largest market share over the forecast period. The liquid systems segment is expected to expand at a high CAGR over the forecast period. Aggregate hydroponics farming encompassed multiple technologies, namely, drip, wick, and ebb and flow. Herein, the plants are grown with the presence of a medium such as rock wool, perlite, and others. It is essential for the farmers to choose the right kind of media for certain crops, as they vary in terms of pH and thickness, which may hinder the smooth growth of roots. However, the liquid systems eliminate the use of such media and provide the nutrients directly to the roots, reducing the time required for yield. Hence, the adoption of liquid systems, such as deep water culture and Nutrient Film Technique (NFT) is expected to witness significant growth over the forecast period. 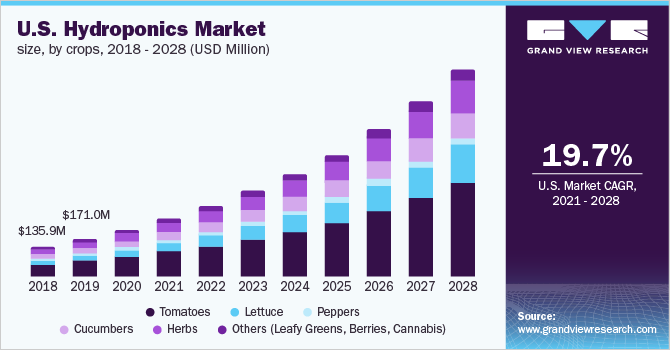 The primary crops cultivated through the hydroponics method are tomatoes, lettuce, cucumber, and herbs. Majority of indoor farmers use hydroponic systems to grow tomatoes. As a result, the tomatoes segment dominates the entire market in 2018 and is estimated to continue its dominance over the forecast period. Europe held the largest share of hydroponically grown tomatoes market in 2018 owing to the high cultivation rate in Netherlands and Italy. Rising demand for organically grown, pesticide-free, and highly nutritious vegetable is expected to drive the adoption of hydroponics for the cultivation of lettuce and other leafy vegetable along with other indoor farming techniques. Among all the leafy vegetables, green leaf lettuce is increasingly gaining popularity among the growers owing to its high consumption rate and worldwide demand. However, owing to the changing and favorable regulations pertaining to the growth of legalized marijuana, the cannabis farmers across the globe are increasingly adopting the hydroponic farming method.

Asia Pacific held the largest market share in 2018, as countries such as China, South Korea, and Japan are finding lucrative opportunities in hydroponics farming to cater to the rising food demand. However, Europe is expected to register the fastest CAGR over the forecast period owing to the favorable government scenario regarding the development and adoption of alternative farming technologies. 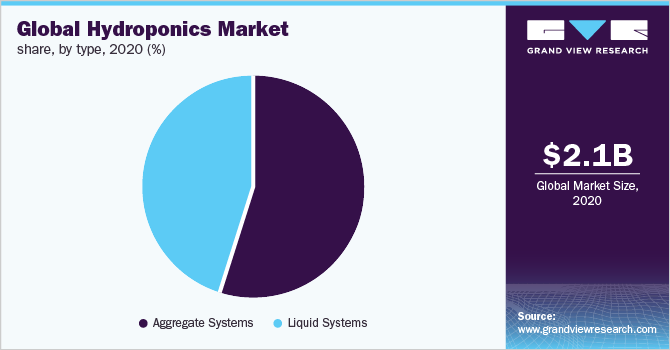 Have Any Query? Ask Our Experts @ https://www.grandviewresearch.com/inquiry/7033/ibb

Grand View Research has segmented the global hydroponics market based on type, crops, and region: