Before 2020, special-purpose acquisition companies or ‘SPACs’ were, for the most part, unknown.  However, in 2020 they burst onto Wall Street as the method of choice for bringing companies to the public domain.  SPACs offer private companies a non-IPO pathway to go public that can cost less than the traditional route, while making enormous profits for their Private Equity investors.   HULT Private Capital wishes to bring private UAE companies public with this route.

SPACs have attracted entrepreneurs, business execs, hedge fund leaders, politicians, and even sports team leaders to their realm; however, the Private Equity market has prospered most with these blank check companies searching for investments.  Last year, even the Industry powerhouse Apollo Global Management, with $414 billion in assets P.E. fund, registered a $500 million blank check company with plans to raise over $750 million.  HULT Private Capital plans to follow suit with their Private Equity division.

There have been both veteran and new firms moving forward with their SPACs in the past year.  For both early adopters and newcomers alike, SPAC deals have been a popular and successful way to capitalize on market volatility caused by the pandemic.  Alec Gores, the Gores Group founder, told CNBC that SPACs offer their sellers flexibility, efficiency, and more accurate valuation certainty while also a quick way to get to Wall Street. 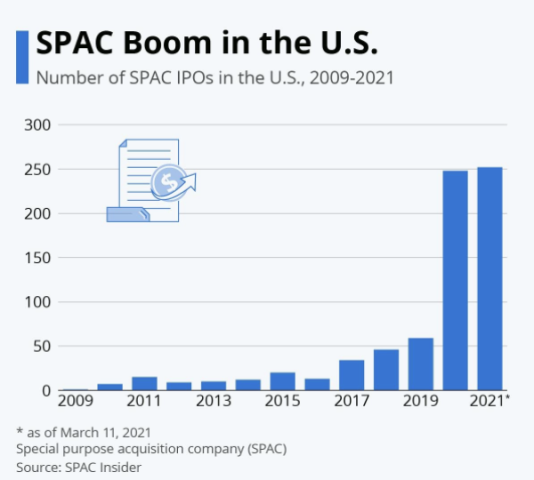 SPACs are first formed as shell companies that have no operations of their own.  Once formed, they will raise funds from outside investors using an IPO, and after, they use the IPO proceeds to purchase a private company using a reverse merger.  The acquired company is still required to pass specific regulatory reviews; however, the SPAC route is a more straightforward path to public markets than the typical IPO roadshow.  The restrictions on travel and in-person meetings caused by the pandemic have certainly helped the SPAC pathway.  SPACs have been around since the 1990s but have gained visible popularity in the past few years.

Gores was relatively early to get in on the SPAC craze when his firm started their first black Check company in 2015, which raised $375 million and merged the following year with Twinkie maker Hostess Brands.  In the years to follow, Gores assembled five more SPACs, one of the two most recently raised $525 million with an IPO, and the other put together $3.4 billion to merge with the autonomous vehicle $$sensor developer Luminar Technologies.

HULT Private Capital is joining a growing group of Private Equity firms in the SPAC market.  RedBird Capital Partners joined forces with the famous Baseball exec Billy Beane, the man behind the movie “Moneyball” to start a SPAC raising $575 million with the aim of purchasing a sports team.  They were followed closely by Mitt Romney’s son Tagg, who announced plans for raising $300 million for a SPAC with former house speaker Paul Ryan; and TPG Capital, starting two SPACs summing $700 million, one with a tech focus and the other with social impact.

The growing number of SPACs formations have increased the deal count and capital raised in 2021.

With their reverse merger structure, SPAC deals require less outlay than a traditional buyout.  A P.E. firm that sponsors the SPAC will buy only 2-3% of the public listing shares.  A venture capital analyst at PitchBook, Cameron Stanfill, stated, “For the Private Equity firm, they get a large economic stake in the business for less upfront investment.”

Private Equity investors, like those in HULT Private Capital’s Private Equity Fund are quite familiar with raising capital in the private market for financing takeovers.  SPACs use public backers, broadening the investment pool and eliminating the time commitments and other obstacles of raising Limited Partnership funds.

SPAC sponsors will line up anchor commitment via a Private Investment in Public equity (PIPe) deal, with outside investment, offering additional liquidity after the SPAC IPO.

SPAC vs. a Traditional IPO

Quick liquidity – a founder (the SPAC company) is structured with warrants usually exercisable within 30 days post-deal, and the founder’s shares are 20% of the size of the SPAC, very significant.

Appeal to targets – a reverse merger requires companies to only negotiate with the SPAC, rather than several prospective investors that an IPO requires; more valuable in a volatile market where IPO valuation on a bad day can dramatically hurt the company’s valuation.

Founders retain more control – when working with a SPAC, they are required to give up less control than a traditional buyout.  This benefit has been why several companies like DraftKings, and VirginGalactic have chosen the SPAC route, seeing stock prices surge since the mergers.  The SPAC economics are much more favorable for the company founders.

Bringing SPACs To The UAE

HULT is joining the ranks of several other Private Equity firms to bring the option of SPAC IPOs to UAE companies.  The SPAC process dictates no talks are to be conducted with target companies until after the SPAC formation; however, HULT’s plan is to focus on strong UAE companies with the best potential for IPO success using the SPAC route.

The Forbes magazine publisher is the most recent big SPAC deal announced with the combined entity valued at $630 million.  Forbes, one of the oldest media companies in the U.S., is merging with the Hong Kong-based Magnum Opus Acquisition LTD., a Jonathan Lin-led SPAC.  Lin is a former executive of billionaire Steven Cohen’s Point.  The Forbes deal expects to bring in $600 million in proceeds, including private investment in public equity (PIPe) of $400 million.

Great SPAC Future For The UAE

2021 is going to be another stellar year for SPACs. Substantial UAE firms will benefit from the help of HULT Private Capital and their Private Equity group.  The SPAC route has several advantages over a traditional IPO. For this reason, SPACs will continue to be the chosen route for well-suited companies to bring their businesses public.