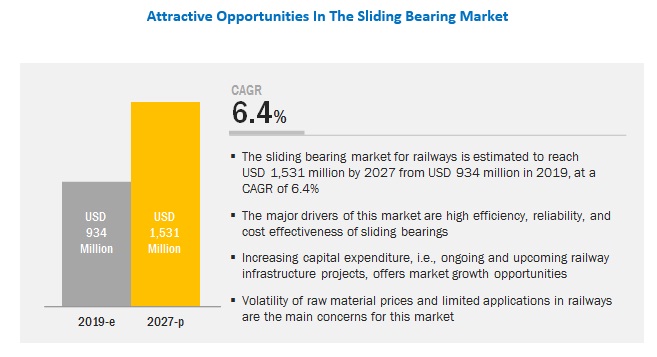 Wagons segment is estimated to hold the largest share in the sliding bearing market, by railway type

Freight wagons segment leads the sliding bearing market, by railway type, from 2019 to 2027 owing to its highest share in the overall railway globally. As per MarketsandMarkets analysis, the freight wagons held nearly 80% to 84% share in 2018. These wagons are installed with bogie, brakes, and coupling mechanisms which are having fitment of sliding bearings. Asia Pacific dominates the sliding bearing market, followed by the Americas as these regions have a high demand for wagons for the transport of goods and other bulk material. Railways is ideal for inter- and intra-country transport due to its safety and cost-effectiveness. Hence, the rising demand for wagons in these regions will directly influence the demand for sliding bearings.

The brake segment of the sliding bearing market, by application, is estimated to grow at the highest CAGR during the forecast period. Each type of railway, irrespective of the region, is installed either with drum or disc brakes. As per the industry insights, a single drum brake and disc brake consist of 1 and 4 units of sliding bearings, respectively. Technological advancements and the growing urbanization have resulted in the high demand for metros and high-speed trains. The high-speed trains and metros & light rails are usually installed with disc brakes to reduce the stopping distance. Thus, the growth in traditional and advanced railways would subsequently fuel the demand for sliding bearings for brake applications.

Europe is expected to be the second largest market for sliding bearings during the forecast period. European countries such as Germany, France, Spain, and the UK are known for promoting the usage of rapid transit systems such as EMUs, metros, and high-speed trains. The European governments are investing in the development of the railway infrastructure. Europe is a hub of global players such as Schaeffler, SKF, GGB Bearing, and IGUS.  These companies are catering to the demand for sliding bearings in the regional as well as the global markets. These companies are also investing in R&D to develop non-metallic sliding bearing, which is useful in light-rails and metros. Thus, continuous efforts by the regional governments to enhance the railway infrastructure and the advancements in the technological capabilities of companies to produce sliding bearing for railway made up of composite materials are expected to provide promising growth opportunities in the European market.

Some of the key players in the sliding bearing market are Schaeffler (Germany), SKF (Sweden), NTN Corporation (Japan), MinebeaMitsumi (Japan), Timken (US), GGB Bearing (US), and THK (Japan).  Continental adopted the strategies of collaboration and new product development to retain its leading position in the sliding bearing market. SKF adopted supply contracts as a key strategy to sustain its market position.

Key questions addressed by the report

To speak to our analyst for a discussion on the above findings, click Speak to Analyst