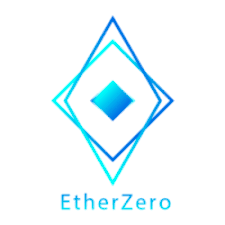 Have you ever heard of Ethereum? If you are basically interested in crypto currencies, then you should have. Ethereum is currently the second most important crypto currency after Bitcoin. In the same breath you should have heard about Etherzero, because this revolutionary project is about to outperform Ethereum.

Etherzero is basically a copy of Ethereum. On January 19, 2018, a group of developers made a copy of the blockchain, a so-called fork.

Usually this is done with the intention to improve the existing one. And indeed, the team of Etherzero has eliminated all weak points that Ethereum has so far disqualified as a universal solution for decentralized applications.

After Etherzero also initially operated with the Proof of Work consensus model, in which computers with power-hungry graphics cards have to cope with complicated computing tasks, the team decided to switch to the much more efficient Proof of Stake Consensus (PoS) for safety and environmental reasons. But that’s not all, this already existing PoS model was modified and supplemented with masternodes. This marriage resulted in the MPoS Consensus, Masternode Proof of Stake. A masternode usually receives transaction data, checks it for plausibility, packs it into blocks and writes them together with some other data into the blockchain. The fact that many masternodes exist and all exchange the same data with each other guarantees the finality of a transaction.

In the case of Etherzero’s MPoS consensus model, 21 masternodes are selected every 10 minutes by an optimized random algorithmus to process the blocks. Optimized in this context means that masternodes running on too slow computers are selected less often than others. This increases the reliability and efficiency of the network. MPoS as a method is much more efficient, environmentally friendly and also safer than the proof of work consensus chosen by Ethereum. The background is that the Miner, the computer that wants to be involved in the network, usually joins a pool in which everyone tries to find new blocks together, and thus collects the reward given per block as Ether. At a certain pool size, rogues could try to take control of the network and feed false data into the network, for example to perform transactions multiple times, the so-called double-spending.

This danger cannot be excluded in the Etherzero network in principle, but because each masternode operator must deposit 20000 ETZ as a pledge, it would be an enormously expensive undertaking. Think about it, assuming there are 700 masternodes, how many masternodes you would need to own to ensure that 21 guaranteed masternodes, all of which belong to you, are selected at the same time. Only then would you be able to feed false data into the network. A hopeless undertaking.

The next important point that is a thorn in the side of critics of Ethereum is the fact that Ethereum is not free. The currency used within the Ethereum network to carry out transactions, interact with smart contracts or decentralized applications (dapps) is called Ether. The need for Ether is due to the gas mechanism. This serves as fuel within the network. Every transaction, every interaction costs gas, and is billed in Ether (Gwei). Everything behind the comma is called Gwei. An Ether consists of 1 billion Gwei. Since the capacities in the Ethereum network are limited by the block time of 5 minutes and the block size, a user must either wait long in times of high data traffic, or increase the gas price of his transaction, because the Miners prefer blocks with higher price. As a result, the price of a transaction continues to rise.

The developers of Etherzero have completely eliminated these major design flaws in Ethereum. The gas mechanism, as an integral part of the Ethereum backbone, continues to exist in Etherzero, but it has been modified and optimized to eliminate the need to charge for the gas. All transactions, all interactions are free of charge.

Thus the team of Etherzero has opened the door for all developers and users in a brilliant vision to create a completely independent and free network in which everyone is not only welcome, but can create and publish their own applications as they wish, completely free of charge.

The Etherzero team has thought even further, however, and made one more far-reaching change to the basic structure: the block time.The block time describes the time that elapses before a transaction can be processed by the network. In the Ethereum network, a block is created every 5 minutes. All transactions made in between must wait until the block is created

The Etherzero team has thought even further, however, and made one more far-reaching change to the basic structure: the block time.
The block time describes the time that elapses before a transaction can be processed by the network. In the Ethereum network, a block is created every 5 minutes. All transactions made in between must wait until the block is created.  And this block only has a certain capacity.
Just imagine the Tokyo subway, rush hour. 500 people are waiting on the platform. The empty train arrives, but only has room for 200 people. The 200 people standing at the very front of the platform will probably board the train. Everyone else will have to wait another 5 minutes. In the case of Ethereum, there is now another factor. Those on the platform who spend more money on their ticket are allowed to board before those who are actually at the front. Only because they have spent more money.

The Etherzero team has put a stop to this problem. The block time was set to one second, one train leaves every second. No one has to wait more than a few seconds. This circumstance makes immediate payments possible. Just do the test yourself: make a transaction in the Etherzero network, and immediately open the block browser www.etzscan.com with the address of the recipient, and see if the transaction is already there. You’ll be amazed. 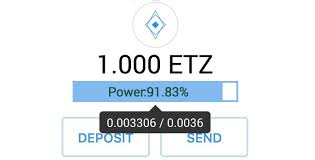 Now one must think this thought of free transactions once further. Wouldn’t it open the network to attacks at the same time? If transactions no longer cost anything, then anyone could send any number of transactions at any time, and in the worst case could even paralyze the network. That’s exactly what the developers of Etherzero have been thinking about, and have invented the power mechanism. The power mechanism is connected to the gas mechanism and consists of a token that acts as a means of transport within the network and is not tradable.

The user notices very little of it, he only sees a power indicator when he opens, for example, his wallet GoEtz integrated in the browser. However, anyone with bad intentions will quickly notice that he will not get far with his attacks. I would summarize the power mechanism as follows: if you want to send transactions, you need at least 0.01 ETZ on your address. The amount of power is always adjusted to the balance, so that the entire amount could be sent in a single transaction. But each transaction consumes power, so many smaller transactions will run out of power in a very short time. In return, with every block, every second (think of the train) some power is added again. This limits transactions in a simple but brilliant way and protects the network. And that without restricting the user.

So as you can see, the developers not only did a remarkable job in eliminating all the flaws in the Ethereum construct, they also intelligently created a secure, public blockchain that can keep pace with today’s concerns and public life thanks to free instant payments.

Maybe you’re wondering what’s keeping you from switching to Etherzero with your project now? You have to give the answer yourself. My answer would be: nothing.

Etherzero is fully compatible with Ethereum. You can easily publish your Smart-Contract at remix.etherzero.org and create your own tokens.
You can also create masternodes to contribute to the security and stability of the Etherzero network.
You can join the community and become a part of the future.

Whatever you decide, in my opinion Etherzero is already superior to Ethereum in everything, and I guess it’s only a matter of time before the world realizes that.