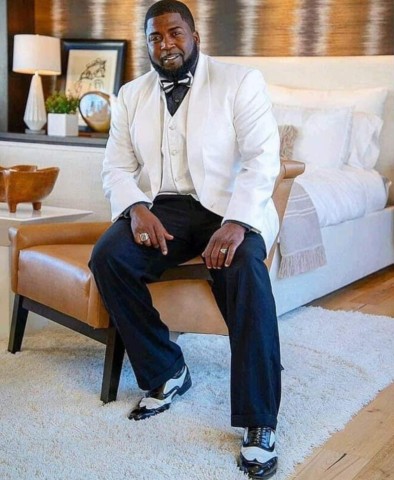 Multidimensional actor, producer, director, and CEO of Bigg Sarge Entertainment Studios, Inc., Robert Deon is set to star and co-produce a new Hollywood classic Sci-Fi-Horror film called “Down for the Count”. The film produced by Bigg Sarge Entertainment, Crimson Red Visuals, and Outlaw Society is described to be about a young war veteran turned blood dealer and has to save the woman he loves, but first he must free himself from the hellish vampire mob that operates in the shadows of Los Angeles. Read below about the latest news on the movie and more!

DOWN FOR THE COUNT CAST & PRODUCTION TEAM!

“Down for the Count” is an independent feature with a 60k budget! The film is written and directed by Tyler Turner of Outlaw Society LLC. Xander Veguilla is the Director of Photography. Cast includes: Lead Actors Robert Déon (SARGE), JaTaun Gilbert(MAC), Anngel Joy( Shanna), Lejon Stewart(DEJA) and Scott Williams as THE COUNT! Stay tuned and follow the official social sites below as the film is confirmed to be released on October 31, 2023.

Watch DOWN FOR THE COUNT Official Trailer: https://youtu.be/VduT6gh-Vyk
BEHIND THE SCENES: ROBERT DEON TALKS HIS EXPERIENCE ON SET: 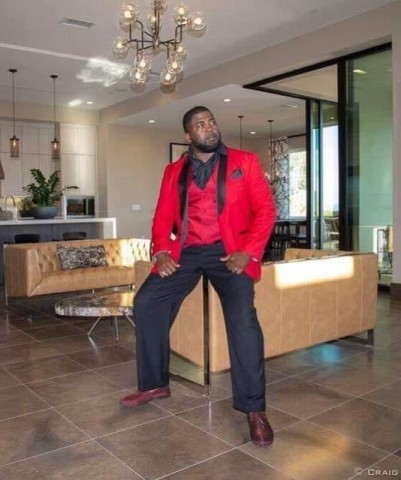 “My Experience on set is that I give it my all to set the tone on set. POSITIVE VIBES, POSITIVE FREQUENCIES AND POSITIVE ATTITUDES is a must. Set life can be stressful if you allow it to be. There will be hiccups happening on any set but it is how you react to it. You can make the situation better or worse. Just like in the military. You always have to be a problem solver. Completing the film safely is the goal. I have learned to apply my upbringing and military training to all case scenarios when it deals with this Amazing craft. You can get more out of people and yourself by having an Addictively Positive state of mind. Negativity is a cancer and it can spread quickly. So we have to be mindful of how we treat every person on set. No matter what position they hold. My goal is to always have great feedback from everyone’s experience when they are on our company’s film productions. And finally, I always want my cast and crew to feel important in their respective positions on set. Because in the end their particular position matters in our overall production. WE LOOK FORWARD TO THE BLESSINGS OF 2023!” – Robert Deon

THE VISION BEHIND DIRECTING – ROBERT DEON 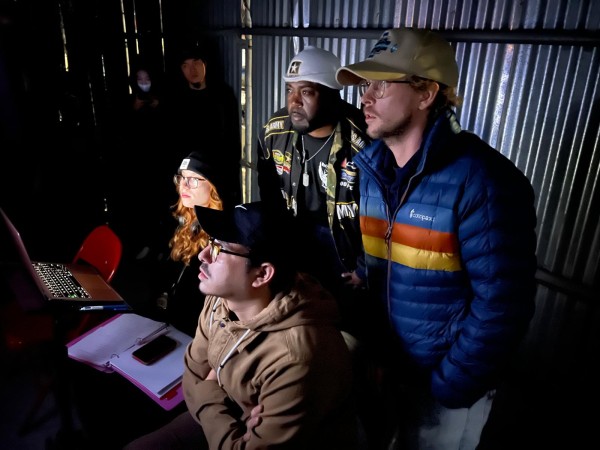 “My vision on directing is to truly bring the words of any script to life. To be the Maestro of an orchestra or almost God like giving birth to a newborn baby or even a Painter creating a Masterpiece from a blank canvas. You have many choices of the direction that you have envisioned for that film. I love the connections that Actors/Actresses make during this process because of the teamwork that is needed to complete the production. As a Professional Actor, it has helped me to understand more of what is needed behind the camera for the MAGIC to happen in front of the Lens. A Great Director is not an Expert but has Subject matter experts in every position behind the camera and knows enough of every position to make the right decisions. In the movies, you want an Amazing story and characters that are believable. But just like the military you want the right leader(Director) to guide the journey the right way. I love watching the High examples of Directors like Ryan Coogler, Elf Rivera, Jordan Peele, and Tyler Perry. The Blueprint is Breathtaking.” 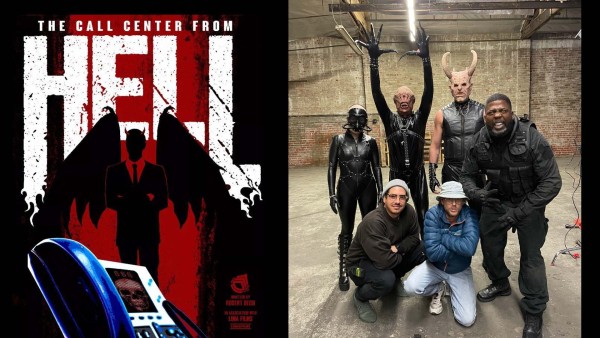 Robert Deon is confirmed to direct a SAG Dark Horror/Thriller Feature film in 2023 called “THE DEVIL’S TAB” co-directed by Mr Stephen Frietas, Marine Veteran and Xander Veguilla. The feature is about “ A young eccentric and egotistical Musician who goes on a psychedelic journey through the seven levels of Hell on his road to redemption or damnation.”  Robert is also confirmed to be directing a new short horror called CALL CENTER FROM HELL that will be released in 2023! 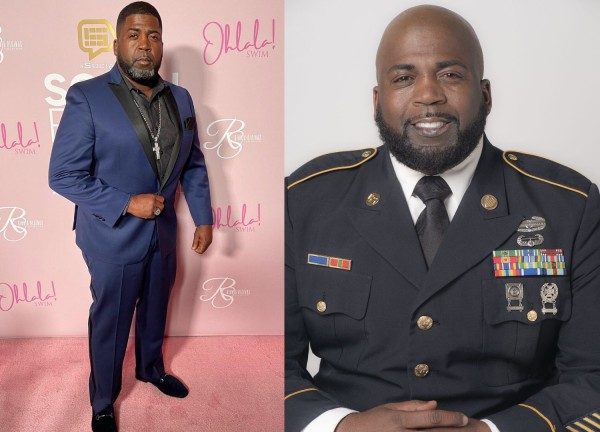 Robert Deon currently resides in Los Angeles, CA and hails from a highly motivated and well-respected family. His father, Robert N. Jones, is a United States Marine and a Minister of Christ, and his mother, Thelma Jones, is one of ABC’s top executives. Robert’s younger brother, Jeremy Jones, is a U.S. Marine and one of the Best Government Service businessperson in the United States, and Dr. Michael Jones is regarded in his profession as one of the top counselors in the United States. Aside from being an actor, Robert Deon is a U.S. Army veteran with 24 years of distinguished service who participated in the Iraq War. Robert Deon has starred in 45+ quality productions in the industry and is confirmed have 4 awards and 3 nominations! 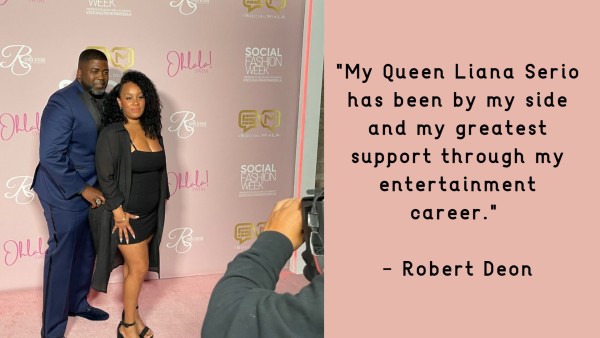 Follow Actor Robert Deon on his official social media sites below to keep up with the latest.

A financial campaign is confirmed to be soon available for potential investors to reach out to Robert Deon of Bigg Sarge Studios for films THE DEVIL’S TAB and DOWN FOR THE COUNT! 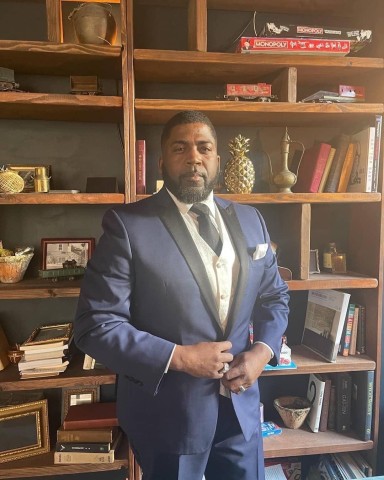 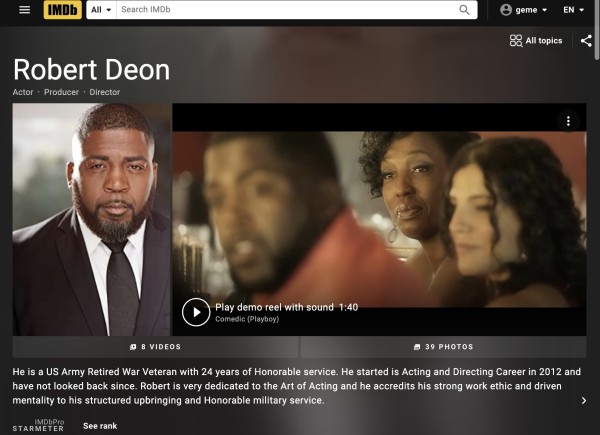