Grand View Research, Inc. – Market Research And Consulting.
According to a report published by Grand View Research, the market is witnessing growth owing to the technical developments in EV charging and significant investment from automakers in EVs along with the initiatives taken by the governments of several countries across the globe promoting the usage of Electric Vehicles.

The global electric vehicle market demand is expected to reach $1,212.1 billion by 2027, expanding at a CAGR of 38.1% over the forecast period, according to a study conducted by Grand View Research, Inc. The market is driven by initiatives taken by governments of various countries to promote the manufacturing of Electric Vehicles (EVs). For instance, the Electric Vehicles Initiative (EVI), a multi-government forum, aims at increasing the adoption of EVs globally. The Electric Vehicles Initiative (EVI) is a multi-government policy forum committed to speeding up the worldwide implementation and acceptance of electric vehicles. The IEA serves as a coordinator to assist member governments of the EVI in this endeavor. EVI was initiated under the Clean Energy Ministerial (CEM), a high-level dialogue involving energy ministers from the major economies of the world. Fifteen countries officially participate in the EVI: Canada, Chile, China, Finland, France, Germany, India, Japan, the Netherlands, New Zealand, Norway, Poland, Portugal, Sweden, and the United Kingdom. Several campaigns and programs have been launched under this forum such as the EV30@30 in 2017, which sets a target for 13 countries to have at least 30.0% sales of new EVs by 2030.

Rising investments in EVs by numerous manufacturers is one of the key market drivers over the forecast period. For instance, in January 2020, General Motors announced its plan to invest USD 2.2 Billion in its Detroit plant to manufacture electric trucks and SUVs. The company plans to introduce over 20 EVs by 2023. Furthermore, in 2018, the demand for global electric cars surpassed 5 million units, more than 2 million units from 2017. China is considered as one of the major markets of electric cars along with Europe and the U.S. However, the lack of infrastructure is anticipated to hinder the electric vehicle market growth over the forecast period.

Growing awareness regarding the reduction of air pollution is propelling the demand for EVs during the forecast timeframe. EVs produce less carbon emission as compared to conventional gasoline cars. It is estimated that EVs emit an average of 4,450 pounds of CO2 equivalents every year, which is almost half of the carbon emissions generated by conventional gasoline cars annually. Thus, EVs help in reducing air pollution and improve air quality, thereby improving public health. This has led various government agencies to promote the usage of electric vehicles. For instance, the U.S. Department of Transportation, Great Plains Institute, and Pollution Control Agency are working in tandem to accelerate the adoption of EVs in Minnesota, U.S. 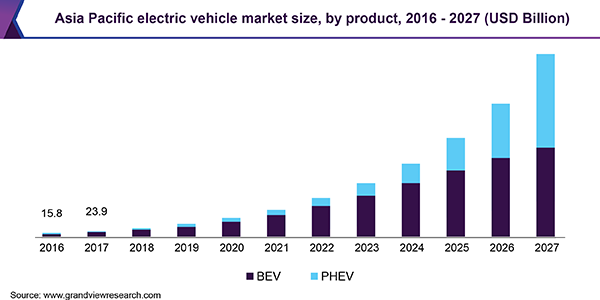 “Would you Like/Try a Sample Report” Click the link below:https://www.grandviewresearch.com/industry-analysis/electric-vehicles-ev-market/request/rs1

Grand View Research has segmented the global electric vehicle market based on product and region:

Have Any Query? Ask Our Experts for More Details on Report: https://www.grandviewresearch.com/inquiry/696/ibb