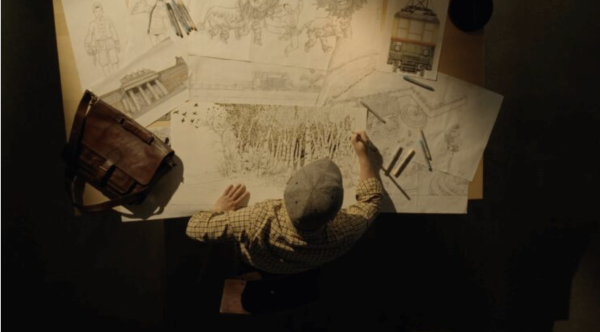 Directed by Jason Loftus, ETERNAL SPRING is the follow-up feature film to Loftus’ directorial debut ASK NO QUESTIONS, which premiered in competition at Slamdance in 2020.

ETERNAL SPRING features a soundtrack that draws the viewer in, remaining throughout the film as a presence and setting the dark tone. The film follows fugitives on the run from the police. One of these fugitives, who is hiding on a farm 100 miles from Changchun, is found by the police and beaten up. This is how the documentary “Eternal Spring” begins. It is very confusing and it is difficult to understand what is happening at times. The mixed media film intermingles 3D animation and present-day footage, taking the viewer on a journey recounting a shared memory that took place twenty years ago. In March 2002, a Chinese state TV signal was hacked by members of Falun Gong, a banned group in China. Loftus follows Daxiong, a comic book artist and the film animator, as he interviews those involved with the hack. Daxiong shares his personal story, often with conflicting memories and perspectives. He guides the viewer on an emotional journey while the interviewee’s stories take the viewer on a separate road. The film requires utmost attention as these two threads of storytelling can lead to confusion. From the audio flow to interviews and animation, the viewer may need clarification which is not provided. The two stories, first of a comic book artist and film animator and secondly of the group Falun Gong, jump from the memories of a TV raid that took place 20 years ago to Daxiong’s love for art. The animation, at times, is choppy, feeling unfinished, and the lack of chronological order keeps contributing to the narrative confusion. The insight into the artist’s mind and his insight are fascinating but, at times, distracting from the filmmaker’s narrative. Watching his creative skills at work while the story unfolds feels like an intimate privilege but lacks cohesion from the main narration.

Throughout the film, the main characters are assigned avatars, as seen in old video games. As they move along the storyline, the character’s avatar pops up as a guide to help the viewer follow along, something that has not been seen in previous animations. The film is cinematically captivating and visually stimulating, telling a very dark and brutal tale that is hard to piece together. From the beginning of ETERNAL SPRING, it is clear that it is a story that needs to be told. However, based on the shared media footage, the viewer gets a feeling that it is told from only one point of view. Sometimes what is left out can make the viewer question its message and its veracity. The movie mixes comic book style with media footage, to mixed results, as the latter detaches the viewer from the tale. As hard as the film is to piece together, the tale pulled from the interviews sensitizes the viewer to the plight of the Falun Gong group. It would have been useful to have another angle of those present at the time interviewed for a more rounded perspective.

It is interesting that real people were utilized to signify an important scene, but it was a little off-putting. To be watching a picture animation and switching to real life characters was not very pleasing to see. The story was also incredibly slow and it seems to not have a clear direction. Because of this, the viewer starts to lose attention and interest halfway through the movie.