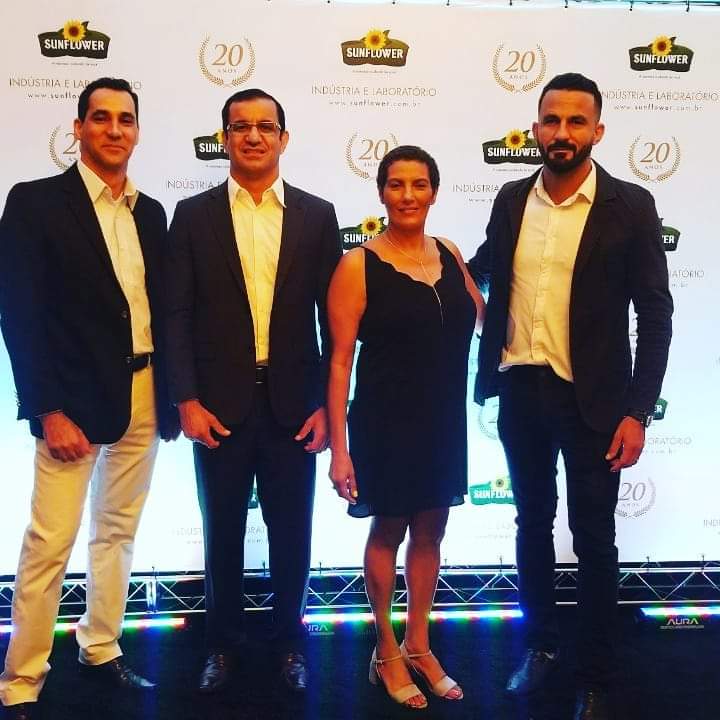 Marcos Mendes (far left) along with his Sunflower company executive team.
Marcos Mendes expands his Brazilian-based businesses to Florida amid an influx of Brazilian immigrants.

In 2017, the U.S. Census calculated 300,000 Brazilians living in Florida — the largest Brazilian community in any state of the country. Today, figures estimate a half million or more Brazilians making part of the ever expanding fabric of the Sunshine state.

The good news for Florida is that a large margin of Brazilian immigrants settling in Florida are professionals, entrepreneurs, investors and young people. With them comes an influx in job creation and added long term work force growth.

Such is the case of Marcos Mendes. A renowned businessman in Brazil who has expanded his operations to South and Central Florida in just a couple of years.

Mendes, 44, is a rare rags to riches story of a Brazilian entrepreneur who through hard work and calculated risks reached the top of the nutritional supplement industry.

“In Brazil if you are born poor, you usually die poor. There aren’t too many opportunities to reach wealth if you don’t come from a wealthy family,” explains Mendes.

In the early 1990s with some seed money his mother gave him, he saw a growing but yet unknown market in the vitamin industry. His mother was key in convincing him that starting a vitamin company was a good investment given Brazil’s abundance in natural resources and low-cost labor.

Self-trained and self-tought, Mendes began as a vitamin middle-man between consumers and more well known companies. Having become familiar with the industry in 1994 he began his own distribution center and then created his own brand called Sunflower. By the mid 2000, Mendes had built his own vitamin manufacturing plant producing not only his own products but a facilitator for other major companies in Brazil.

“I think what attracts people to doing business with us is the quality of our service and products, we mimic American standards of quality control and that really gives people confidence in what we do,” says Mendes.

Mendes is not only CEO of Sunflower, he also invests in various other ventures making him a bit of an angel investor in Brazil.

Yet, for all the work and talent of entrepreneurs like Mendes, Brazil seems to create more obstacles than facilitate further growth and expansion. High interest rates on basic loans, insecurity and at times political instability forces top businesspeople to look abroad in order to continue their expansion.

Since arriving to the US a few years ago Mendes has further expanded his brand. Sunflower in the US has hired dozens of employees and invested more than $1 million in machinery, infrastructure and inventory.

His expansion has positioned him as one of few Brazilian businesses to experience growth during the global pandemic. Globo magazine, Brazil’s most viewed media outlet, has reported on his domestic and international growth as astounding during a pandemic when most businesses have stalled or all together folded.

“Risking is not a foreign thing to me, taking risk has been the impulse my companies have used to grow,” says Mendes who is also an author of successful business books r4lated to the vitamin industry.

Florida has gladly welcomed Mendes and others alike. With its ease to registering a business and banks rushing to cater loans to proven business models, Florida has become the cartel of Brazil’s most ambitious entrepreneurs.