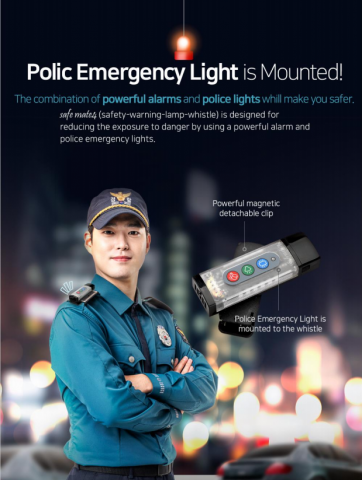 As the world is at high risk of infection from Corona 19, the classic whistle cannot be used due to the problem of saliva splashing and ‘safety’ is the most important keyword, Alpha Alarm Tech’s LED whistle, LED Safemate, is exported to the U.S. as a self-defense product for personal safety.

‘LED Safemate’ was with the idea of the Korean police, and is expected to be used as an epaulet for police officers in Korea; it has a police LED safety warning light and an electronic whistle with a powerful alarm sound (108dB) to help organize traffic conditions and protect women and the elderly. It is a handy self-defense product and is expected to be released all over the world, starting with export to the US this time.

According to the company, it can be used for maximum 8 hours continuously on a single charge in case of an earthquake, fire, or landslide disaster; it can be used to facilitate rescue process, especially in case of car breakdown, and to prevent secondary accidents. It is also said to be effective as a personal self-defense for women who return home late or the socially disadvantaged.

Also, ‘LED Safemate’ is a waterproof product that can be used conveniently with USB charging method, and it can be used for about a month with 8 hours of continuous charging and 1 year of standby time.

‘LED Safemate’ was selected at the 2020 Seoul City Awards and is strengthening international marketing cooperation with Europe and Asia starting with export to the US.

In Korea, Hyundai Motors and crew members of the SRT Suseo use ‘LED Safemate’ at sites. 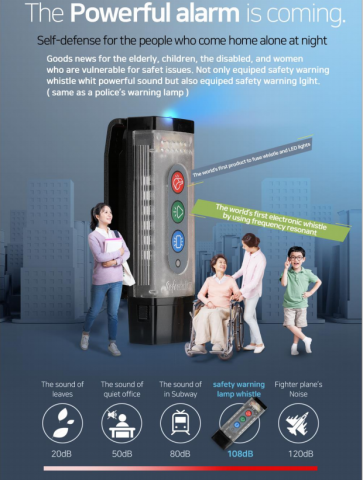 There is virtually no strong whistle with 108dB which has LED as well. In the case of Japan, a classic whistle is mandatorily included as an essential product in the disaster safety kits distributed to the public. This is to facilitate rescue from earthquake disasters. It is clear that not only Korea but also the whole world needs a national safety kit and “LED Safemate” should be included in it.