The report “Aircraft Seating Market by Class (Business, First, Premium Economy, and Economy), Type (9g and 16g), End Use (OEM, Aftermarket, and MRO), Aircraft Type (NBA, WBA, VLA, RTA and Business Jets), Materials, Components, and Region – Global Forecast to 2026″, size is projected to grow from USD 4.1 billion in 2020 to USD 5.8 billion by 2026, at a CAGR of 5.8% from 2020 to 2026. The market is driven by various factors, such as the growing demand for seats installed with IFEC systems, increasing number of premium economy seats, and maintenance & retrofitting of existing aircraft.

The projected rise in GDP during the next 10 years in emerging economies such as China present significant potential for the market. China, in recent times, has attracted significant foreign investments due to stable growth and robust developments in the economy. The Civil Aviation Administration of China (CAAC), Directorate General of Civil Aviation of India, and the Australian Transport Safety Bureau (ATSB) are among the region’s regulatory bodies that ensure adherence to safety rules and air travel regulations within their respective countries. The leading manufactures of aircraft seats in the Asia Pacific include JAMCO Corporation (Japan) and AirGo Design (Singapore), among others which cater to the Asian market. 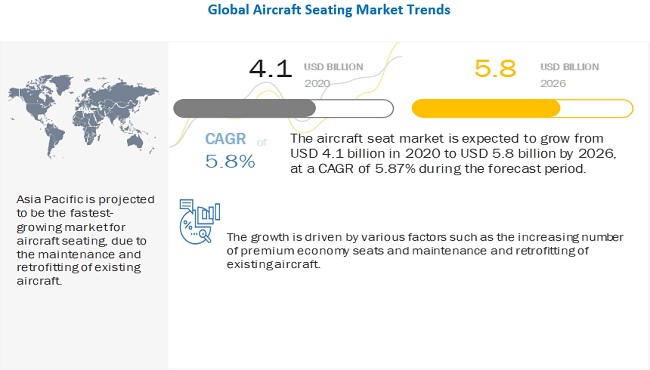 Based on end use, the OEM segment is expected to lead the aircraft seating market share during the forecast period.

The OEM segment is expected to be the largest market by value. The growth of the OEM segment of the aircraft seating market can be attributed to the growing demand for seats installed with IFEC systems, increasing number of premium economy seats.

WBA segment is estimated to be the fastest-growing market

Based on aircraft type, the wide body aircraft segment is projectedto be the highest CAGR rate for the aircraft seating market during the forecast period. The demand for interiors in wide boy aircraft is comparatively more than narrow body aircraft and regional transport aircraft as there is more space to install wide seats and other cabin interior products. Major airlines operating wide body aircraft are focusing on upgrading their interiors to the latest technologies.

Based on the seat type, the 16G segment is expected to lead the aircraft seating market share during the forecast period.

The 16G segment is estimated to have the largest market share by value. According to the Federal Aviation Administration (FAA), passenger aircraft should have seats capable of withstanding 16 times the force of gravity to increase the chances of survivability of passengers and flight attendants in case of accidents. New seats undergo a series of tests to determine their strength, similar to crash tests which have to meet FAA safety standards.

Asia Pacific is projected to be the highest CAGR rate for the aircraft seating market during the forecast period. The growth of this region is attributed to the countries in this region upgrading their capabilities by undertaking developments in the field of aircraft seating, thus offering a significant opportunity for OEM manufacturers to expand their businesses.