MarketsandMarkets™
The global agricultural fumigants market is estimated to be valued at USD 1.59 Billion by 2017 and is projected to reach USD 1.94 Billion by 2022 at a CAGR of 4.10% during the forecast period.

The agricultural fumigants market is estimated to be valued at USD 1.59 Billion and is projected to grow at a CAGR of 4.10% from 2017, to reach USD 1.94 Billion by 2022. The growth of this market can be attributed to the growing focus on increasing agricultural production, increase in focus on the reduction of post-harvest losses, and growing usage of fumigants for the production and storage of cereals. However, there are several region-specific regulations on the usage of agricultural fumigants by various governing bodies, which act as a restraint for the market growth. Additionally, accumulation of residue on grains, fruits, and proposed ban on methyl bromide are also expected to affect the market growth. 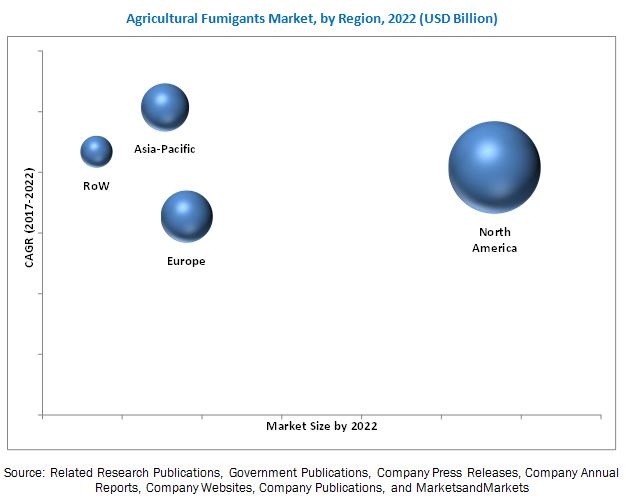 Increase in focus on the reduction of post-harvest losses

Reduction of post-harvest food losses is a critical component for ensuring food security. Post-harvest losses arise from freshly harvested agricultural produce undergoing changes during handling. Post-harvest losses are a measurable reduction in foodstuffs and affect both quantity and quality. According to the UN DESA (United Nation Department of Economic & Social Affairs) report the global population is expected to reach 9.7 billion by 2050, further adding to global food security concerns. Thus, food availability and accessibility can be raised by increasing the production and reducing losses.

Developing countries are expected to witness strong demand for fumigants

According to the FAO, countries in the Asia Pacific region such as India, China, and Japan have displayed above-average growth in agricultural output, and this trend is expected to continue through 2025. According to the FAO, more than 2.2 billion people in the region are engaged in agriculture, leading to an increased demand for agricultural fumigants for better cultivation and crop growth, as well as to prevent losses after harvest. In addition, the use of fumigants in India and other developing countries is becoming more common, thereby creating opportunities even in areas where there had previously been little or no adoption of fumigants. However, other developing countries such as Brazil and Argentina have emerged as new agricultural powerhouses; especially Brazil, which is currently one of the world’s most potent agricultural markets and is expected to grow at a rate well above the regional average.

In 2017, North America is estimated to hold the largest share of the global agricultural fumigants market. The major drivers for this significant share are the influence of the growing demand for alternative pest control methods, strict government regulations regarding food safety, and wide product availability which further boosts the market growth. The North American market is driven by countries such as the US and Canada.

This report includes a study of the marketing and development strategies, along with the product portfolios of leading companies. It includes the profiles of leading companies such as the BASF (Germany), Syngenta (Switzerland), ADAMA (Israel), Dow Chemicals (US), and FMC (US). Other players include UPL (India), Degesch (US), Nufarm (Australia), American Vanguard (US), Nippon (Japan), Arkema (US), and Rentokil (UK).

MarketsandMarkets’s flagship competitive intelligence and market research platform, “RT” connects over 200,000 markets and entire value chains for deeper understanding of the unmet insights along with market sizing and forecasts of niche markets.