“Watch out for Neon Hook – A brand new arcade-style outrun and rope-swinging video game in which you need to go upwards instead of sideways, and the pixel-art graphics alongside the entirely appropriate synthwave soundtrack are values that everyone will most certainly appreciate.”

The game can be characterized as procedurally-driven, as well as a pixel-art game, which is the current wave of gaming nostalgia people value dating all the way back to the 80s and 90s. You’ll be starting to play the game as ‘Rika’ who controls involved outrunning and swing to avoid and surpass a number of obstacles, including the existential black hole swallowing the city beneath you. That means that ascension with the help of grapple hooks is one of the most interesting feature allowances, as you move from building rooftops, as well as many other challenging situations laid in front of you. You can even collect a number of anti-matter particles to unlock a progressively expanding availability of runners, as well as different levels of grapples, ropes, and power-ups. 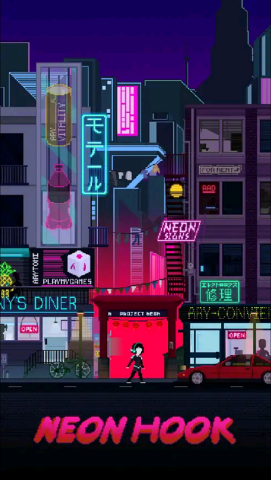 There isn’t any doubt regarding where the influences running wild all over Neon Hook comes into being. The developers have gone fully into that Retro-type wave of nostalgia, reaping from several cultural milestones from the 80s, including cyberpunk, synthwave, sci-fi, dystopian and the revolutionary 8-bit imagery. But, that doesn’t mean that the game contains any contemporary influences, but it’s done in such a way to be uniform and consistent with the overall scenario built up. By every means, it would feel like you’re in a futuristic New York, or Neo Tokyo with just a little bit of Miami cityscape integrated into the entire design.

You can download the game from https://play.google.com/store/apps/details?id=com.Arytomi.ProjectNEON, and download, install and start playing absolutely free. Neon Hook is completely appropriate across family settings, and you’ll find something that is presenting a very engaging and attractive package altogether.

Arytomi Studios Inc. is an independent game development company from Vancouver, Canada, and is a definitive vision of three developers/entrepreneurs who want to provide only the gaming products in the market. They are certainly fully into the idea of pursuing growth and invested in the idea that their released games have the greatest chance of facilitating exactly that. Neon Hook is their first officially released game, and it was developed with Unity 2D.