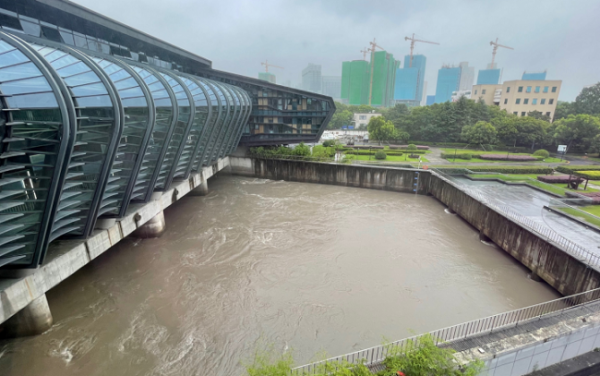 The highest water level of Gongchen Bridge in the city reached 2.68 meters, which surpassed the warning level, at 7 am on July 26. In response, the Sanpu drainage station initiated its four sets of drainage machines, with the forced drainage flow reaching a maximum of 200 cubic meters per second.

Hangzhou‘s Chengxi River, which connects to the Qiangtang River, had the risk of river backflow after days of rain. To help the river reach a safe level, the Dadaosha pump station near Qiantang River was used to drain flood water for the first time since it started operation in 2011.

Another reservoir Qingshan closed all its gates at 6:40 am on July 26 to intercept the flood and to ensure the safety of Xixian Datang, an important flood barrier in northern Hangzhou.