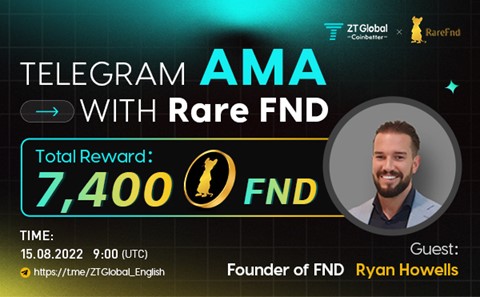 On August 15th at 17:00 Singapore time, Ryan Howells, founder of The Rare Antiquities Group and CEO of FND, joined ZT Club to share FND with users and talked about a look at how FND became known.

“Rare Find then Fund is the first end-to-end crowdfunding platform in the blockchain. Using FND as a fundraising token, Rare FND is able to help crowdfunding campaigns reach their goals faster by automatically pledging when donating to charity or for startups.” Ryan Howells had this to say.

As Ryan Howells explained, Rare FND is a new token that is part of the Rare ecosystem, which consists of four platforms: the NFT marketplace, MetaVerse, Dex, and Rare FND.

Among them, Rare FND leverages all the components of the already established technology, using fractionalization of crowdfunding in order to distribute NFT to contributors after a successful crowdfunding campaign and enable the flow of the ecosystem.

It is worth mentioning that in the development of FND, the R&D team used a new technique called steganography. Steganography is the act of hiding one image within another, and FND creatively used this technique for NFTs, hiding images within NFTs that can only be displayed with an encryption key. The team used this for art, encrypting certificates of authenticity in each NFT component, even if the NFT only shows one or two pixels of the artwork; and applied it to the Rare FND crowdfunding platform, allowing charities and startups to pass on their incentives or rewards by encrypting them in the NFT after a successful crowdfunding campaign.

This technology is very secure and is one of the advantages for FND. Rare FND has also worked hard on the security level. In fact Rare FND has a smart contract deployed with lossless.io that protects the FND holder. Once the holder becomes a victim of fraud or cyber attack, they can report the transaction on lossless.io and as long as it is reported before the token is sold on Pancakeswap, then the FND token will be frozen.

Beyond that, FND does not receive any commissions. In fact, FND pays charities and startups to use our platform. It is well known that some of the major crowdfunding platforms charge commissions, some as high as 5%, on all funds raised.

As the first and only platform to offer a cryptocurrency-based fundraising program, Rare FND does not set a minimum amount for crowdfunding. Instead, Rare FND has set up a more stringent compliance process for applicants to go through. To raise funds on the platform, projects must have a detailed project plan with a plan for the use of funds and a timeline for spending them.

Due to the combined effect of these mechanisms, the FND price will be completely dependent on the utility of the token. As long as there are startups and charities using the Rare FND platform for crowdfunding, then the price of the token will continue to increase. It can be said that the relationship between FND price and point in time is effectively weakened.

In the future, Rare FND will establish long-term partnerships with other programs and add CEX purchase channels, such as the ZT trading platform! Now there are also super activities, users can win a lot of FND in registration and trading.

ZT Club mainly focuses on project incubation, community integration, activity expansion, industry education and other blockchain-related content integration. It is committed to promoting the prosperous development of the blockchain industry and building the industry ecology together. Since the beginning of the broadcast, we have invited many famous industry experts, new blockchain projects, capital institutions, hot communities and other guests and successfully carried out many live sharing sessions.

In the future, we will continue to bring you new traffic, new resources and new ways to play blockchain in the form of voice, video and audio from time to time.