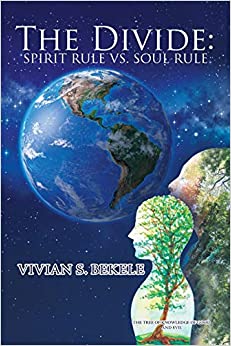 ‘You knew I was a snake when you listened to me; and you wondered why I bit you knowing that you would die?’

Published in November 2018, ‘The Divide: Spirit Rule vs Soul Rule’ is a dissertation about the impact of the Tree of Knowledge of Good and Evil on the mindset of mankind once the two Adams (Genesis 5:2) disobeyed the command not to eat from the tree, for which the punishment would be death if they did so. The dissertation gives a plausible explanation of the consequences that resulted which has plagued mankind from that time on; and the remedy to right the penalty of death.  The remedy reinstates mankind to their rightful place as governor of the earth by releasing mankind from the rule of a lesser god (I Corinthians 4:4) only if mankind chooses the remedy.

Vivian Bekele explores 4 major characters in her book which are the first two Adams – male (Adam) and female (Eve) as in Genesis 5, the last Adam, Yeshua aka Jesus the Christ (I Corinthians 15:45) and Satan, the serpent.  All four characters in her book are endowed with “free will.”  The test of all four is whether they will exercise their “free will” to adhere to the instructions of the One who created them in order to establish a family for Himself. Set in the Garden of Eden as in the third chapter of Genesis, the serpent’s character is described. Also, it explores his approach to the female Adam to test her freewill for obedience or disobedience. Vivian Bekele explains how the serpent distorted the command that Yahweh (God) had given to the male Adam by asking the female if what Yahweh (God) had said was true, as the following statement by serpent depicted: “He said to the woman, “Did God really say, ‘You are not to eat from any tree in the garden’?” (CJB)

“The Divide: Spirit Rule vs Soul Rule,” also delves into the essence of the death penalty decreed by Yahweh to Adam if he should eat from the Tree of Knowledge of Good and Evil (Genesis 2:17) by weaving together biblical clues to explain what the essence of the death penalty is. Understanding the essence of the death penalty gives insight regarding why man cannot save himself and supporting what Yeshua aka Jesus said: “I am the way, and the truth, and the life.  No one comes to the father except through Me.” (John 14:6).  Highlighting this statement by Yeshua, aka Jesus, the book investigates the supernatural conception of Yeshua and why this has made Him the only redemptive force who can reconcile the fallen man to the Great I AM.  As a book of deep questioning, Vivian Bekele creates curiosity in the minds of her readers as she asks, “What was the male Adam looking at since they were both naked and did not know it?  When she ate, her nakedness became apparent and visible – yet he had not eaten?” “Why was the male Adam so mesmerized that he became … caught up in the seduction that had been perpetrated by Satan through the serpent upon the female Adam?”

The book further explains how disobedience to the command not to eat of the Tree of Knowledge of Good and Evil catapulted mankind into a corrupt mindset inhibiting all to think righteously with one exception.  That one exception is the antidote for the restoration of the fallen mankind to its righteous posture. Vivian Bekele believes that the world is currently operating in total fear due to the worldwide pandemic. “The Divide: Spirit Rule vs Soul Rule” provides the path to faith, fidelity, integrity, tenacity and temperance to operate righteously in the earth to overcome the evil and fear that permeates the world system.

Vivian S. Bekele is the seventh of ten children from Andrew James Smith, Sr. and Lizzie S. Smith.   Enamored by the spoken word as a child watching the preacher’s mouth as he preached, Vivian pursued the written word as a result of her spiritual upbringing. Educated in the public schools in Atlanta, Georgia, Ms. Bekele graduated from Georgia State University with a Bachelor and Master Degrees in Urban Life: Community Relations and Human Resources.  Pursuing the written word, Vivian acquired 49 hours toward the Doctorate of Jurisprudence from John Marshall Law School in Atlanta, Georgia.  The pursuit of the written word culminated in her first book, “The Seed of Abba…The Seed of the Woman.”  Still pursuing the written word, Ms. Bekele published her second book, “The Divide: Spirit Rule vs Soul Rule.”