Vitiligo is a condition in which the skin loses melanin, the pigment that determines the colour of skin, hair, and eyes. If the cells that do not produce melanin die or no longer produce melanin, slowing growing white patches of irregular shapes appear on the skin. The typical lesions on the skin can be defined as milky white, non-scaly macules that are present with distinct margins.

Albany, US – DelveInsight has launched its new report on Vitiligo Market Insights, Epidemiology and Market Forecast-2030

Report Highlights:
1. In the coming years, Vitiligo market is set to change due to the rising awareness of the disease, and incremental healthcare spending across the world; which would expand the size of the market to enable the drug manufacturers to penetrate more into the market
2. The companies and academics are working to assess challenges and seek opportunities that could influence Vitiligo R&D. The therapies under development are focused on novel approaches to treat/improve the disease condition
3. Major players are involved in developing therapies for Vitiligo. Launch of emerging therapies will significantly impact the Vitiligo market
4. A better understanding of disease pathogenesis will also contribute to the development of novel therapeutics for Vitiligo

“The main symptom of Vitiligo is flat, white spots or patches on the skin. Gradually the patch will become completely white. Sometimes the centre of a patch may be white with pale skin around it.” 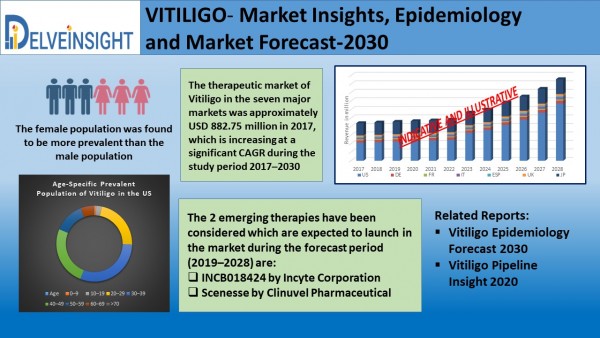 Many researchers have identified several forms of Vitiligo. Generalized Vitiligo (also called non-segmental Vitiligo), which is the most common form, involves loss of pigment (depigmentation) in patches of skin all over the body. Another form called segmental Vitiligo (also known as unilateral or localized Vitiligo) is associated with smaller patches of depigmented skin that appear on one side of the body in a limited area; this occurs in about 10% of affected individuals.

The emerging drug therapies boosting the Vitiligo treatment are:
1. INCB018424
2. SCENESSE (afamelanotide)
And many others