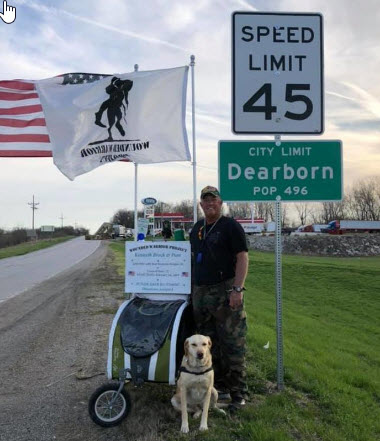 Sunday, the U.S. Army veteran and his service dog received a hero’s welcome home after completing their journey by foot.

Brock and Pam walked from Keystone Heights in southern Clay County to Coeur d’Alene, Idaho — undaunted by extreme heat, tornadoes, torrential rain, snow and life-threatening traffic — all to help our veterans out that are in the Wounded Warrior Project.

Ken and his service dog Pam made the trek to promote the nonprofit’s programs for veterans with post-traumatic stress disorder (PTSD).

Brock and Pam started walking Feb. 1 at Amvets Post 86 in Keystone Heights. Pam rode in a cart pushed by Brock, who wore out seven pairs of shoes during the journey that concluded June 27 in Idaho.

“It was a journey that spanned more than 2,600-plus miles, but it’s a journey I will never forget,” Brock told a standing-room-only crowd packed into the Amvets Post on Sunday.

“With the people that have touched my heart along the way, the different outlook that I’ve got now from what I had when I left, America is beautiful. It really is,” he said in a voice filled with emotion.

Pam has been trained to assist Brock with PTSD stemming from his military service. Pam, a yellow Labrador retriever, is his faithful companion and service dog. Wounded Warrior Project has been instrumental, Brock said, not only in his life but the lives of thousands of other veterans.

Brock and Pam had raised at least $9,300 in donations as of Sunday evening for Wounded Warrior Project. Contributions still are being accepted at WWP.

The donations will help injured military personnel living with traumatic brain injury (TBI), PTSD and physical injuries get the vital support they need.

“It’s important for me to support those who sacrificed so much for our freedom,” Brock said when he launched the walk. “By fundraising for Wounded Warrior Project, I’m helping wounded warriors thrive in life back at home, post-injury.”

His Facebook page went from seven followers to over 1,700 as he chronicled his walk.

“I relished every night when I pitched a tent or was in a hotel when I got one, looking through those posts, reading them. It gave me encouragement. It warmed my heart, and it gave me energy to get out there and keep going the next day and each day after that,” Brock said.

Wounded Warrior Project, headquartered in Jacksonville, helps wounded veterans and active duty military personnel via a variety of services and programs. More about the organization, its mission and other information is at WWP help.

K9s For Warriors is the nation’s largest provider of service dogs and emotional support dogs to military veterans suffering from PTSD, TBI and/or Military Sexual Trauma (MST) as a result of military service post-9/11.

Tate blogged about their three-month journey and their experiences along the way at Rolling with Jax. During the ride, they stopped at veterans monuments throughout the country to pay respects to the military and those who gave their lives.