The report “Ultralight and Light Aircraft Market Aircraft Type (Ultralight & Light Aircraft), End Use (Civil & Commercial and Military), Flight Operation (CTOL & VTOL), Technology (Manned & Unmanned), Propulsion, Material, System and Region – Global Forecast to 2030″, size is projected to grow from an estimated USD 5.5 billion in 2020 to USD 11.6 billion by 2030, at a CAGR of 7.7% during the forecast period. The increasing number of high net worth individuals, upcoming new aircraft program, and aging fleet size to drive the growth of the market. Though the market has witnessed a slow growth in recent years, aircraft with Vertical Take-off and Landing (VTOL) capability and environment-friendly propulsion technologies, including electric and hybrid engines, are expected to reduce the operating costs drastically and serve as an opportunity for the market growth up to 2030. 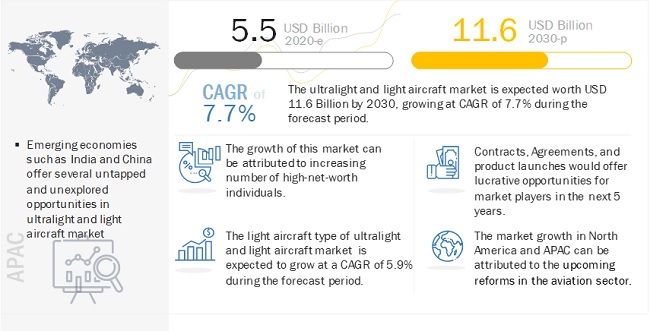 The outbreak of COVID-19 and the resultant lockdowns and restrictions have taken a colossal toll on the world’s economic activities. The restrictions on air travel across various regions for both domestic and international flights have negatively impacted the entire aviation sector. This will lead to a downturn for chartered service providers and private jet operators, generating no sales from the unoccupied seats leading to revenue loss. The temporary halts in production have impacted the market for ultralight and light aircraft adversely. Aircraft deliveries have been delayed in the first and second quarter of 2020, due to lockdowns in various countries

Based on aircraft type, the ultralight segment is projected to grow at the highest CAGR from 2020 to 2030. The growth of this segment can be attributed to new startups focusing on developing aircraft in the ultralight category. Commercialization of urban air mobility will further drive the growth of ultralight and light aircraft market, which will be used for intra- and intercity travel.

“Based on technology, the unmanned segment is expected to grow at the highest CAGR in the ultralight and light aircraft market during the forecast period”

Based on the technology, the unmanned segment is projected to grow at the highest CAGR from 2020 to 2030. Rise in demand for unmanned aircraft from the military end use segment and rapid commercialization of the passenger drone technology is expected to drive the overall demand in the ultralight and light aircraft market.

“Based on system, the avionics segment is projected to grow at the highest CAGR in the ultralight and light aircraft market during the forecast period”

The growth of this segment can be attributed to the periodic upgrades in avionics systems. Manufacturers are currently focusing on avionics components to develop products that are more reliable, accurate, and efficient. Continuous improvements in software technology have modified the human-machine interface of avionics systems. It has become more user-friendly and can automate a wide variety of in-flight tasks, thereby reducing the workload of the flight crew to a large extent.