Los Angeles, CA – Feb 26, 2020 – Five teens must compete to win a billionaire’s mansion, all while facing-off against a super computer.

Written by Jeff Wild and produced by SkipStone Pictures’ Johnny Remo, MAX WINSLOW AND THE HOUSE OF SECRETS follows five teenagers who compete to win a mansion owned by a billionaire scientist. But to win, the teens must face-off against a super computer who controls the mansion.

“MAX WINSLOW AND THE HOUSE OF SECRETS is a sci-fi thriller for the entire family done right,” wrote Film Threat.

“MAX WINSLOW AND THE HOUSE OF SECRETS is a heartfelt sci-fi adventure,” wrote Killer Horror Critic. “It provides some genuine hope and guidance for a world that is filled with real horror.”

MAX WINSLOW AND THE HOUSE OF SECRETS also stars award-winning actor, Tyler Christopher (General Hospital, Into the West, Out of the Past, Days of Our Lives), Emery Kelly (Alexa & Katie) and Jason Genao (Logan, On My Block). 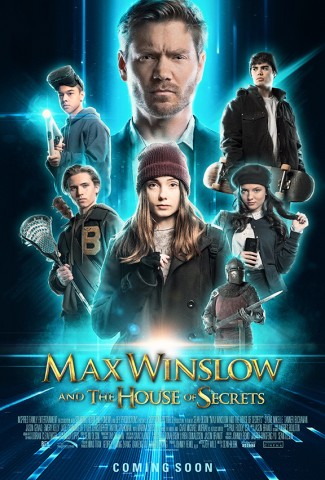