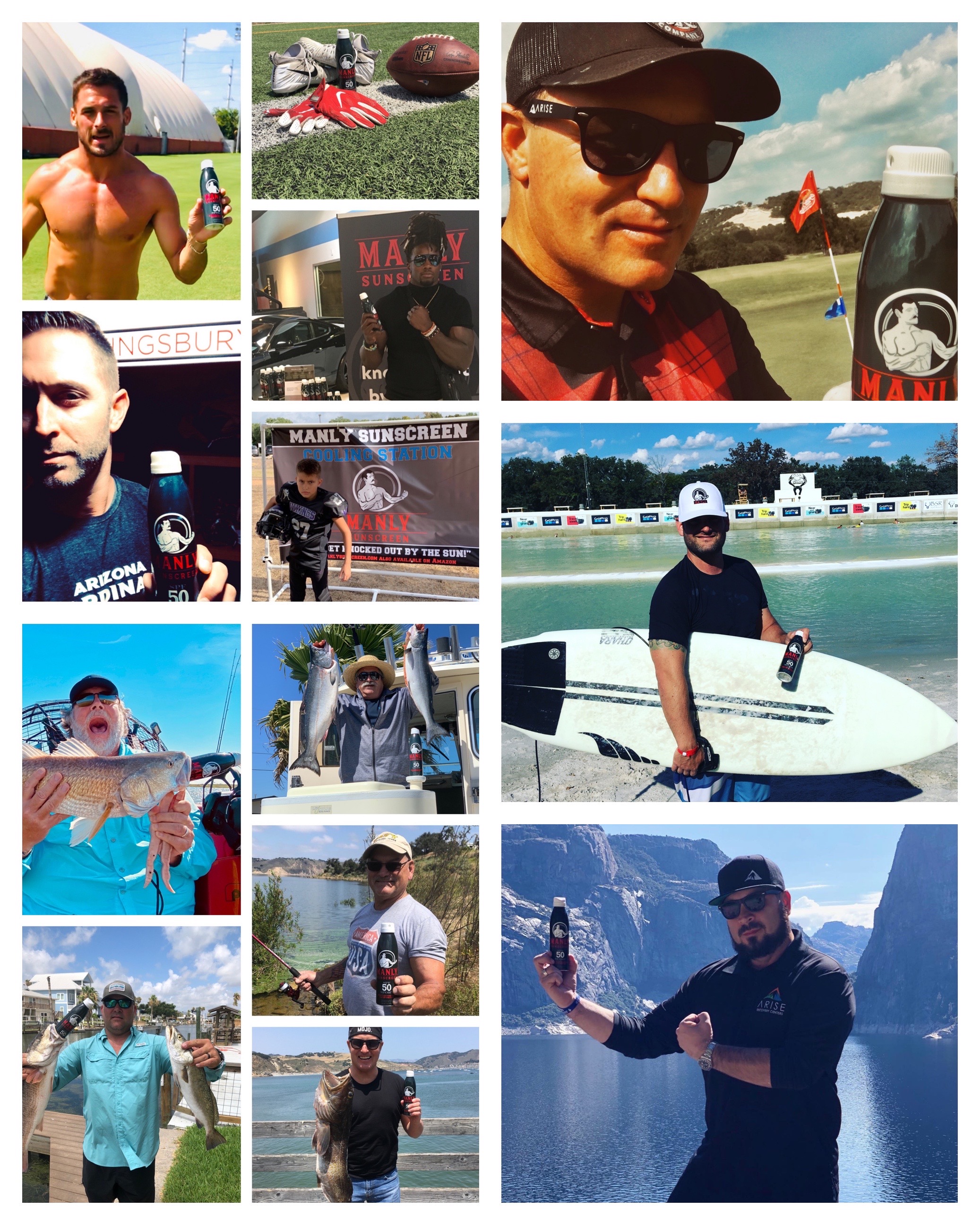 Don’t get knocked out by the sun…get Manly!
MANLY SUNSCREEN SPF 50 SPORT is a broad-spectrum UVA/UVB epidermal protectant that applies and dries clean and clear without the need for rubbing it in. Our highly effective, non-greasy, non-whitening, fragrance-free formula utilizes a leading-edge copolymer to form a protective, permeable film that allows the skin to breath while providing water resistance up to 80 minutes.

Manly Sunscreen has been featured on E-Entertainment News, numerous magazines, blogs, fashion websites and was even chosen to be the official sunscreen for the 2019 ESPY AWARDS. Manly is also AMAZON’S CHOICE for Men’s Sunscreen and has a slew of celebrity and professional athletes endorsing the product such as; Danny Amendola (2X Superbowl Champion receiver), Kliff Kingsbury (Head Coach of The Arizona Cardinals) LA Chargers running back Melvin Gordon, NBA ALL-STAR Dwight (Superman) Howard to name a few. All of these accomplishments are great but they don’t tell you who we are and how all of this came to be… so I give you, THE BIRTH OF MANLY.

THE BIRTH OF MANLY

You might be asking yourself, who are these guys and how did they come up with Manly? Well it all started when two best friends decided to take a dude vacation to the illustrious beaches of Maui. Okay really Nate has been a practicing dermatology PA since 2013 and had a skin care conference at the famous Grand Wilea hotel. I, this is Lane btw, was in between making movies. No, seriously, I’m a working actor who plays Ray on Yellowstone and most notably made my name playing Tweener on Fox’s hit show Prison Break. Anyways that’s beside the point. The point is I figured I could tag along.

Basically salt water fish my brains out, golf and catch a few waves along with a few sunburns from hell. Even after losing my father who had skin cancer, I refused to put on sunscreen. I hate the stuff. It’s greasy, flowery smelling and I feel like I can’t be active outdoors, or even swing my clubs or cast my line to fish. Nate, being the smarter of the two of us, would “goop up” as I call it. He spends most of his time cutting skin cancer out of guys like me. He would preach to me about the dangers of the sun and I would shrug him off and make fun of him for looking like a ghost. But at the end of the day, Nate was fine and able to hike, bike, surf and golf while I tip toed around the condo burned like a lobster. Now he was the one who was laughing.

The result was the two of us coming up with the perfect sunscreen that guys like me would want to wear…and Manly was born. A clear, fragrance-free spray, that wasn’t sticky or greasy so I could be active outdoors and not even feel like I was wearing sunscreen. Manly is also reef-friendly and 80 minutes water resistant. Don’t get knocked out by the sun like I did… get Manly.