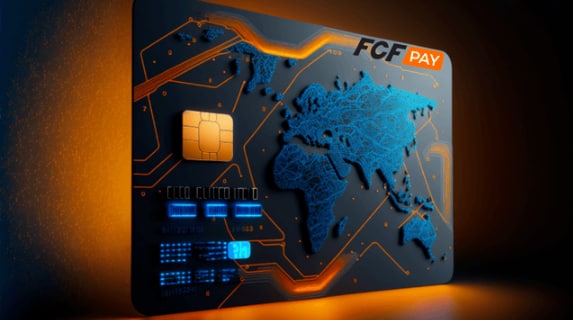 FCF PAY will soon be celebrating its 1st birthday. We have covered their success and development in the past year and they just announced major news. FCF Pay has secured the rights to issue cryptocurrency cards globally.

The card’s users can now spend and withdraw up to $100,000 in less than 5 minutes just by transferring any cryptocurrency into their card. As stated on their social media accounts, the Canada-based company offers this service to centralised exchanges, decentralised exchanges and crypto projects.

We have seen in the past that the FCF team has close ties with the world famous dog coin Shiba Inu. Will Shiba Inu issue their own cards through FCF Pay? After all, the #ShibArmy have long wished to show off their beloved Crypto Canine logo when they’re out shopping.

FCF Pay has created the perfect solution to easily integrate its software into existing payment gateways and payment service providers worldwide are rushing in to be amongst the firsts to support blockchain technology payments without having to spend vast resources and many months – or even years – of development to create a solution. The Canadian company has perfectly positioned itself to cater for the global demand for cryptocurrency payments with a unique software system and business model that provides immense flexibility and expandability.

But who is behind this innovative startup that never ceases to spread its tentacles around the global cryptocurrency market and traditional payment industry?

FCF Pay is one of the multiple products and services launched by the Canadian company named FCF Inc.  As one would expect from a tech start-up, it is run by entrepreneurs and experts in blockchain technologies.

Visionaries or geniuses, the team behind FCF Inc have been releasing new products/updates/products and strategic partnership on a regular basis since its debut 11 months ago. But who is the brain behind this fast growth?

The two main names that surface when it comes to FCF PAY; John Nasr and Joe Parkin, two experienced entrepreneurs with a track record of success in the commercial world across a variety of sectors. Their shared passion, which has led them to go all-in on the development of FCF Pay, is to return cryptocurrencies to their originally intended function; to pay for goods and services.

There is no doubt that leveraging the power of blockchain technology will revolutionise the payments industry, but to make this happen, FCF has introduced a unique business model that makes the most of the community spirit that characterises so many crypto projects. The key to creating this symbiotic relationship with their community is $FCF Revenue Sharing Token. In exchange for the priceless assistance that the community provides by spreading the word about the FCF Pay project across social media, FCF Inc. rewards the community with 66.66% of all transaction fees that are processed through the payment platform; 33.33% as BNB dividends, and the remaining 33.33% as buyback and burn or the token.

Not only this, but FCF Inc. is harnessing the power of affiliate marketing! Anyone can refer PSPs, merchants, banks, crypto projects or any other organisation to use FCF Pay and earn instant commissions for every single transaction that is processed from their referrals.

Add to all this the fact that FCF Pay provides its service as a white label software service, rather than trying to compete with established companies, and success seems inevitable.

At the time of writing this article, the volume processed through FCF Pay is rising consistently and there are regular updates from the team about deals that are being closed with more white label partners. Sources close to the team are expressing extreme excitement, stating that they would never have expected the system would be in such high demand amongst well-known companies.