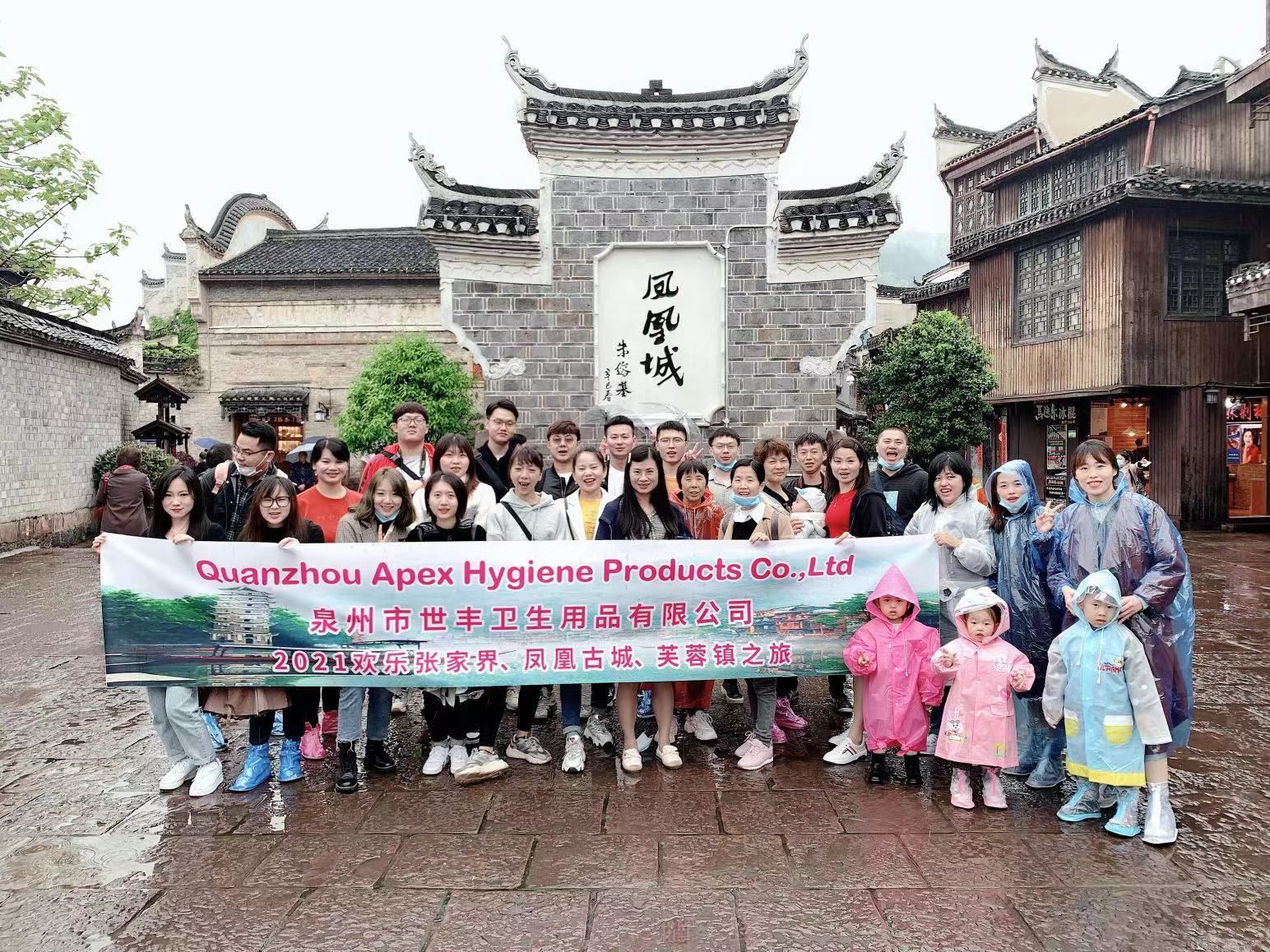 On the afternoon of April 15th, the first trip of Quanzhou Apex Hygiene Products Co., Ltd. to Hunan began.

There were 27 adults and four children on the trip.The first stop we went to the ancient city of Phoenix, which is located in the southwest of Xiangxi Tujia and Miao Autonomous Prefecture of Hunan Province. It is a national 4A scenic spot. Fenghuang Ancient Town has a long history and beautiful scenery. The city is decorated with purple sand and stone towers, stilted buildings built along the Tuojiang River, ancient courtyards of the Ming and Qing Dynasties, and the Tuojiang River flowing quietly with green oil. There are scenic spots outside the city, such as Nanhua Mountain National Forest Park, Qiliang Cave of Art Palace, Huangsiqiao Ancient Town built in Tang Dynasty, and the world-famous Great Wall in South China. It is comparable to the ancient city of Lijiang in Yunnan and Pingyao in Shanxi, and enjoys the reputation of “North Pingyao and South Phoenix”.

The second stop we went to Huanglong Cave. Huanglong Cave is known as the swan song of karst caves in Central China for its huge three-dimensional structure, cave space, abundant karst cave landscape, and sightseeing routes with both land and water. Cave in a variety of strange scenery, river, stalactites up to more than 20. It is proved that the cave is more than 600 meters long, with ups and downs along the way, thickly covered by the whirlpool and hanging bell emulsion, with myriad gestures. The cave is composed of multiple layers and the front hall is wide and soluble to tens of thousands of people. There are holes in holes, mountains in holes and rivers in holes. It is of great scientific value because of its large scale, the beauty of the cystole and the strange landform.

The third stop is Shaoshan, the former residence of Chairman Mao Zedong.

The fourth stop was Changsha, where we tasted the famous local snacks.

A few days later in Hunan local tour, we can not help sighing the motherland’s great rivers and mountains, beautiful scenery.

After this event, the company’s teamwork ability has been greatly improved, laying a solid foundation for the smooth progress of the company’s business in the future.