More on the NBA 75th Anniversary Season celebration: on Monday, NBA and Nike unveiled the new designs for the City Edition Jerseys for all participating teams from the East and West.

This tradition goes back to 2017 and has helped further develop the hoop culture through creative expression. In particular, the annual team uniform shows the distinct character of each team; using both time and place as inspirations and highlighting some of the unforgettable moments across the league. These fine points ultimately result in a unique and threaded mark of team heritage printed into basketball gears.

Take a peek at the 2021-22 Nike NBA City Edition Jerseys for the Eastern Conference Teams, and know how some of the designs came to be: 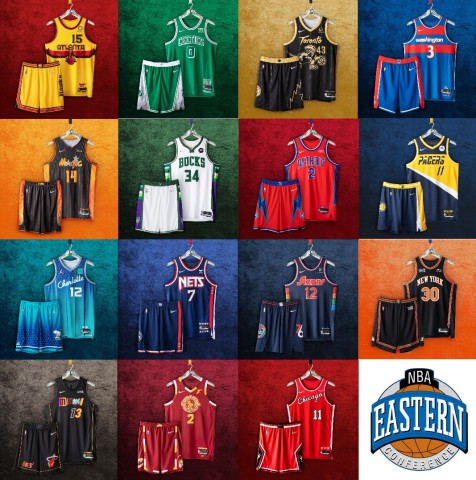 –  The unforgettable script from the Bulls’ debut ’66 season graces the jersey chest. Two callouts to the team’s three-peats cover the area above the jock tag. The four stars of the city’s flag stud the belt buckle, while on the diamond cutout of the shorts, a black pinstripe pattern hearkens back to the team’s second three-peat.

–  This is a mash-up in the truest sense of the word, comprised of a collage of letters and numbers from the franchise’s most iconic jerseys. The black base is a neutral foundation for the letters pulled from uniform sets like the technicolor Vice Nights jersey, the Miami Floridians jersey, and others. Just above the jock tag appears “15 Strong,” referring to the team’s 2006 championship run. Rounding out the uniform is a thin golden stripe that symbolizes the security ropes brought out by arena staff seconds before the thrilling Game 6 shot in 2014.

–  The black uniform features orange and blue piping and checkered side panels. A graphic treatment of the team’s world-famous arena is shown on each leg, while the belt buckle boasts the logo that defined the team in the 2000s. The shorts carry retired Knicks numbers along the waistband.

–  The team’s 40-year relationship with its home arena is celebrated by the arena’s logos on the shorts and the belt buckle. The arena’s signature multicolor pattern runs up the sides of the jersey. The deep blue body color is a deeper version of the team’s royal blue, while the wordmark, numbers, and player names are inspired by the team’s graphic identity from the late ’70s.

–  The uniforms are styled in the franchise’s classic crimson and gold, a pattern that honors the return of the team’s swashbuckling swordsman from the ’70s and the Miracle at Richfield. The jersey pays tribute to the ’16 championship season and the legendary comeback that brought the city its first title in generations. The shorts rep the Cavs logo from the ’80s and ’90s playoff runs on one leg, and the logo from the historic ’16 season on the other.

To see the complete list of the new City Edition Jerseys of the fifteen teams from the Eastern Conference, visit Nike’s official website.

See your favorite players crossover to the next round wearing their new Nike-NBA fits by staying on top of the league. Don’t miss out on anything by downloading a free sports app such as FreeLiv.

FreeLiv is a sports telecast service that allows you to keep track of all the NBA matchups anywhere in the world. It provides users a complete schedule of the league and has a ‘remind me’ button that notifies you whenever there is an ongoing game. This feature helps you follow your favorite teams’ agenda amid your busy schedule. In addition to that, the app also offers an in-depth and professional post-game analysis and statistics of the game and the players.

For more information about the app, click here or download the app now to see for yourself.