The report “Surveillance Radars Market by Application (Commercial, National Security, Defense & Space), Platform (Land, Airborne, Naval, Space), Frequency Band (HF, UHF & VHF; L; S; C; X; Ku; Ka; Multi-bands), Dimension, Component, Region – Global Forecast to 2025″, size is projected to grow from USD 8.0 billion in 2020 to USD 11.5 billion by 2025, at a CAGR of 7.6% from 2020 to 2025. The market is driven by various factors, such as the advancement in border surveillance systems, ongoing military modernizations, demand for border surveillance, and the need for advanced air defense systems among others. 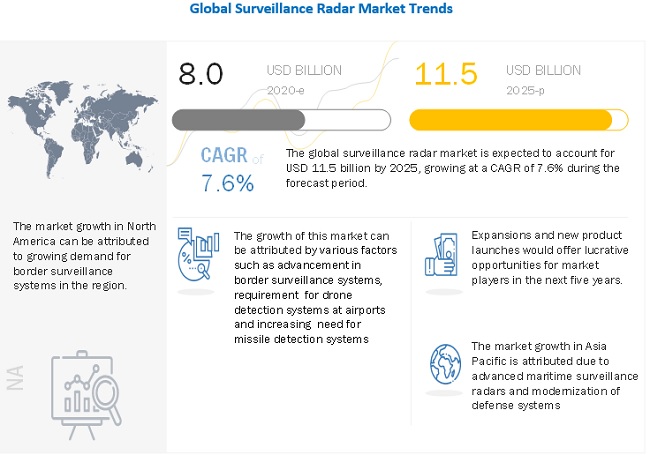 Based on the application, the defense and space segment is expected to lead the surveillance radar market share during the forecast period.

Long range radars segment is estimated to be the largest market share during the forecast period.

The long range radar is estimated to be the largest market sahre segment in the surveillance radar market. The growth of this segment can be attributed due to need of long range radars are used for long-distance tracking and accurate location. These radars are capable of engaging multiple targets simultaneously and can resist electronic jamming. For example, the range of SPS-48 land-based surveillance radar offered by L3Harris is estimated to have a range of 460 km, which can track multiple targets moving in any direction, at any speed.

Based on the Frequency, the X-band segment is expected to lead the surveillance radar market share during the forecast period.

Based on the frequency band, the X-band segment is expected to lead the surveillance radar market during the forecast period. The market for X-band surveillance radars is expected to grow during the forecast period due to its preference for military applications. X-band is reserved for government and military use. Several marine radars operate on X-band as it provides better target resolution, especially for long-range applications.

The  North America region of the surveillance radar market has the highest market share during the forecast period. The surveillance radars market in the North American region is expected to witness substantial growth during the forecast period due to the ongoing modernizations of aircraft, ships, border surveillance systems, among others. According to an article published in by The Intercept on 25th August 2019, the US Customs and Border Patrol (CBP) are planning to install 10 surveillance towers across the Arizona border under a USD 26 million contract with Elbit Systems (Israel). Cross-border conflicts, high illegal immigration rates, and drug trafficking have led to the US Homeland Security investing heavily in border security and detection systems. The US Customs and Border Protection has started installing surveillance towers across the Texas border.