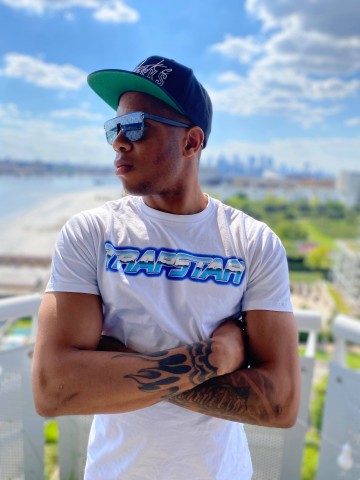 Des Montana, had a similar upbringing in south London like Stormzy & was a ‘“Hood Rat” while growing up, which is his inspiration for his longly awaited second track “WHY YOU CALLING”

Drawing on his experience as a young teenager Des has written WHY YOU CALLING which is released on 15th August 2021. Des says trouble was normal & part of a young mans lifestyle during his childhood in South London. Fighting, robberies, and drug dealing were pretty much “bog standard” & no one really batted an eyelid. Even robbing the pizza man and borrowing his ‘ped was normal life there!

Montana, 24 years old, is originally from Italy moving to London as a youngster and was raised in South London. While as a young teenager, like his mates, he was a bit of a “Hood Rat” getting in and out of trouble. However it was Stormzy who became an inspiration & started his interest in music. Developing his love of music allowed him to move away from that lifestyle and he has now just completed a Degree course in Digital Marketing.

But it is that early life experience that Montana has drawn on to create “WHY YOU CALLING”. Montana’s second track is an accurate reflection of the London city lifestyle as Montana sets a dynamic flow with a bass beat that punches up the urban energy. The track sets an authoritative tone that whisks you through busy and fast-moving streets.

The cheeky lyrics move along well with the distinct vigour of the track. Montana refers to his background as he raps about his “two ‘phones.” He represents the next generation of “kids on the social” trying to “get this bread” and make it big in cities everywhere.

Des Montana’s music video for “WHY YOU CALLING” on YouTube keeps up with the track’s energy. Cars, young women and bundles of money whisk you through South London highlighting the urban beat.

‘WHY YOU CALLING’ can also be found on Spotify & all other major music platforms. Two weeks after his debut, his Spotify page has over 4,200 listeners and nearly one thousand followers. In addition to UK cities such as Birmingham and London, Des Montana also has fan bases in some U.S. cities ranging from Seattle to Trumbull, and even out to Honolulu.

Major UK radio stations are certainly boosting Des Montana’s rapid rise by already playing ‘WHY YOU CALLING’ indicating a strong promise of success in the industry.

Des Montana is a 24 year old drill/rap artist from South London. Drawing on his unique upbringing in Italy and London Des has been writing tracks since a teenager. He uses his passion of music as a way to expresses his feelings and experience to his growing audience. Des Montana seems to be joining the ranks of UK drill, which originated in the South London district of Brixton from 2012.