According to a research report “Space DC-DC Converter Market by Application, Type (Isolated, Non-Isolated), Form Factor (Chassis Mount, Enclosed, Brick, Discrete), Input Voltage (<12V, 12-40V, 40-75V, >75V), Output Voltage, Output Power, Platform, Type, and Region – Forecast to 2026″ published by MarketsandMarkets, The space DC-DC converter market size is projected to grow from USD 35 million in 2021 to USD 52 million by 2026, at a CAGR of 8.3% from 2021 to 2026. The market is driven by various factors, such as increasing satellite constellation, the emergence of digital power management and control, and increased demand for high-performance and cost-effective systems. 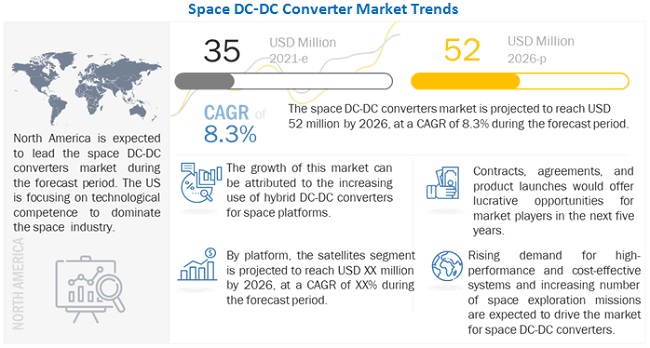 Based on output voltage, the 5v output voltage segment is projected to grow at the highest CAGR rate for the space DC-DC converter market during the forecast period. A 5 volts DC supply is required in various satellite subsystems. The tracking system used in satellites works on 5 volts DC supply. 3DPM0289 from 3D Plus (France) is one of the space DC-DC converters with variable output up to 5Vdc. Other than that, companies like AJ’s Power Source (US) and Tame Power (France) also provide customized products for 5 volts rad-hard DC-DC converters. These converters are also used to supply power to memory devices in satellites.

Based on input voltage, the

Based on the platform, the rovers/spacecraft landers are projected to grow at the highest CAGR rate for the space DC-DC converter market during the forecast period. A rover (or planetary rover) is a planetary surface exploration device designed to move across the solid surface on a planet or other planetary mass celestial bodies. Some rovers have been designed as land vehicles to transport members of a human spaceflight crew; others are partially or fully autonomous robots.

Based on the application, the electric power subsystems are projected to grow at the highest CAGR rate for the space DC-DC converter market during the forecast period. An electric power subsystem is a network of electrical components deployed to transfer, supply, and use electrical power. The EPS consists of a battery, solar panels, distribution units, and power conditioning. There are two solar panels of size 0.81m x 0.72 m in the roll direction of the satellite. There are four DC/DC converters that provide the required secondary voltages for the payloads and bus subsystems.

North America is projected to be the largest regional share of the global space DC-DC converter market during the forecast period. Major companies such as Advanced Energy, Vicor Corp., Texas Instruments, Crane Co., XP Power, and Astronics, and small-scale private companies such as VPT, SYNQOR, and AJ’s Power Source are based in the US. These players continuously invest in the R&D of new & improved designs of space DC-DC converters.

The space DC-DC converters market in North America is driven by the increase in space programs and the launch of new satellites. Space DC-DC converters are power modules used in spacecraft and satellites to provide continuous power supply to the space power management systems. Recent technological developments in satellite manufacturing through electric propulsion systems increased the demand for more efficient space DC-DC power products in the market.