The most widely followed U.S. stock market benchmark, the S&P 500 index, is currently on the brink of a crucial technical level. A failure to hold here could send the stock indices tumbling — an event that has transpired four times in 2022.

This conflicts with strong season patterns through the end of December, indicating that the rally may not be over.

The S&P 500 has trended higher since putting in a bottom on October 13th. Uptrends are defined as higher swing highs and higher lows. That pattern, however, is on the verge of breaking.

The last swing low was Nov. 29th (3,939.65) before the S&P 500 pushed to a new swing high. The index has since dropped back to that level and is currently consolidating into a tight sideways range.

This also formed a rounded-top pattern or head and shoulders pattern, which commonly occurs before price declines. 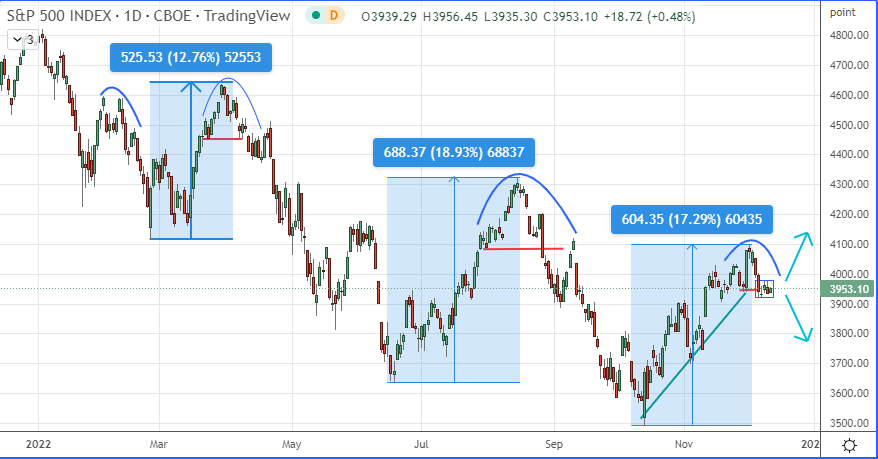 The low of the consolidation (indicated by the small box on the chart) is 3,918.39, which sits right near the aforementioned swing low. Traders will be watching for the index to drop below that level to signal an end to the two-month rally.

That pattern has a downside target of 3,770, but with the longer-term downtrend continuing throughout 2022, prices could slide still lower.

An analyst with SafeTradeBinaryOptions breaks down the situation:

“This is a pivotal time for stocks. Stocks have been under pressure through much of 2022, despite some brief rallies. The June through August rally ended after advancing about 19%. The current rally has advanced 17% and is forming a possible topping pattern.”

He went on to add,

“The case for a continued rally isn’t dead. A push higher from current levels is quite bullish — a technical term we call a false (downward) breakout. The end of December is also a seasonally strong time of the year for stocks.”

If the rounded top fails to push the price lower, the upside price target is 4,140. That would eclipse the December 1 high and keep the current uptrend alive.

The end of December has historically been a strong time for stocks:

While these are short-term patterns, they could help push the index higher from current levels, which would continue the uptrend.

Longer-term investors are encouraged to remember that the 100-year average yearly return of the S&P 500 is 10.366%. The index tends to rise over the long-term. It’s an important metric to keep in mind during volatile times.

To find out more about this research and what it means for investors, visit: safetradebinaryoptions.com