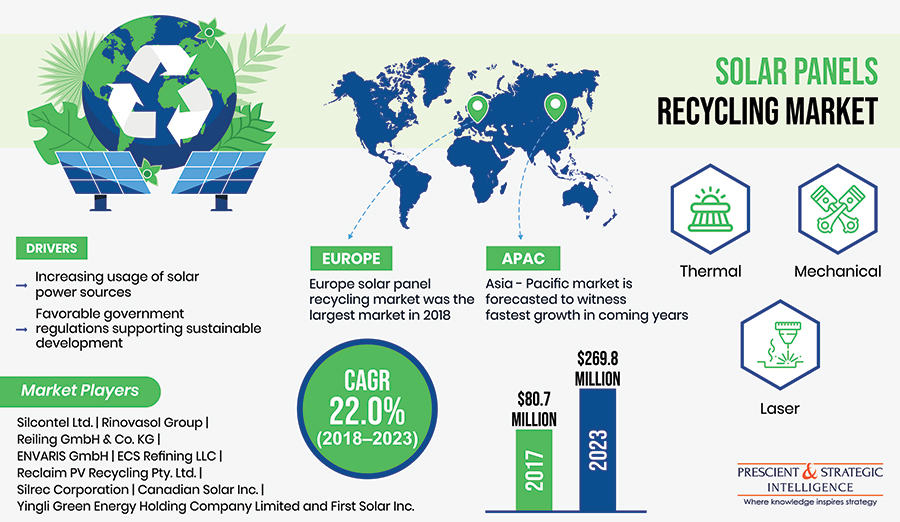 Across the globe, climate change has become a grave issue, as has its cause, air pollution. The harmful gases released from the burning of fossil fuels are the main reason behind all such problems, which is why governments are strongly encouraging an eco-friendly lifestyle. As a large amount of coal, gas, and crude oil is burned at power houses, green alternatives to produce electricity are being promoted. Among these, solar energy has been the most effective and cost-efficient, which is why the sale of photovoltaic (PV) or solar panels is continuously surging. As these panels have a limited lifespan, they generate a significant amount of e-waste, which is creating the need for solar panel recycling.

The solar panel recycling market valued $80.7 million in 2017, from where it is predicted to grow to $269.8 million in 2023, at a 22.0% CAGR during 2018–2023. Recycling is done to break the panels down into their individual constituents, including aluminum, glass, and silicon, so that they can be used to produce other objects. Thin-film, polycrystalline, and monocrystalline are the three types of PV panels used, among which the monocrystalline type account for the highest recycling rate. The reason behind this is that these see the highest adoption because of their superior material grade, greater efficiency, longer shelf life, relatively higher space efficiency, and excellent heat resistance.

During the forecast period, the salvaging and recycling rate of the other two types of panels would be higher than monocrystalline variants, owing to the rise in their usage. This hints at the rapid usage of the solar energy creation technology, which is due to the increasing awareness of people and governments on its various benefits. These panels, apart from keeping the environment clean and lowering the cost of electricity, also give buildings modern aesthetics.

Another reason solar energy is becoming popular is the reducing cost of power equipment. As per YellowLite, a solar panel installation and manufacturing firm based in the U.S., and the Solar Energy Industries Association (SEIA), the cost of producing energy from the sun reduced by up to 70% since 2010, owing to a decrease in hardware and pre- and post-construction costs. This is why governments of several countries are have been to reduce the subsidies on the installation of PV panels.

It is also because of the slumping prices that the PV technology is being rapidly installed in developing nations, which is, in turn, leading to an increasing requirement for panel recycling. Among all countries, the solar panel recycling market growth in India is expected to be the fastest during the forecast period, as many new companies are entering this service domain and the rate of PV installation is also surging. Additionally, a lot of research is being done here to develop more-efficient and cost-effective recycling techniques.

As a downside, solar panel waste can cause health issues such as skin and eye irritation, and in extreme cases, cancer. To minimize the possibilities as much as possible, governments have laid down strict rules regarding solar panel recycling. One such regulation is the European Waste Electrical and Electronic Equipment (WEEE) Directive, under which collection schemes were created, for people to give away their e-waste for free, in order to encourage recycling. Similarly, in the U.S., the government has put the onus of recycling PV panels on their manufacturers.

Therefore, with a rise in the focus on clean energy, solar panels will gain even more popularity, which would lead to an increase in the need to recycle them after the completion of their life.

Lithium-Ion Battery Market: The global lithium-ion battery market valued at $33,720.8 million in 2018, which is projected to reach $1,06,493.0 million by 2024, with a CAGR of 21.8% during the forecast period. The growth in the market can be attributed to the growing automotive and consumer electronics applications.