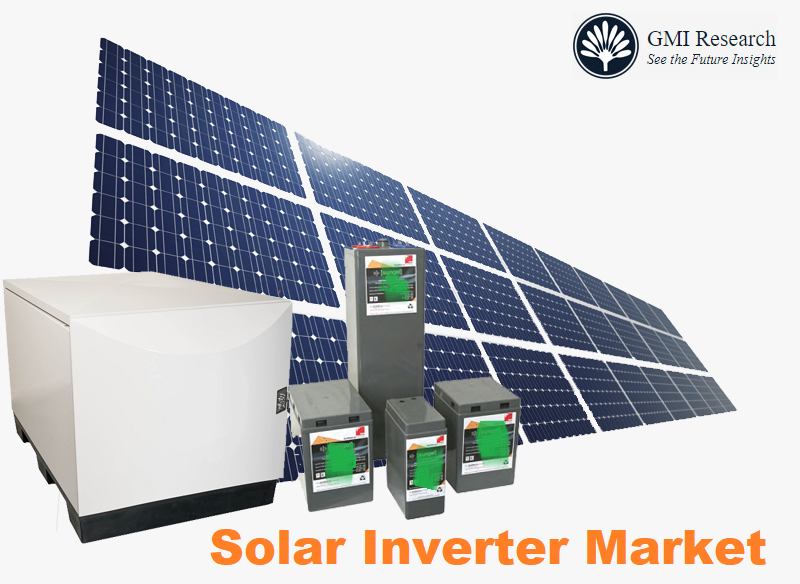 Solar Inverter Market Research
The Global Solar Inverter Market is witnessing significant growth during the forecast period due to the accelerating demand for 24*7 electricity supply, expansion in the construction activities, followed by the growing environmental concerns, which is encouraging individuals to opt for solar inverter.

The rapid infrastructural development and the strong demand for a 24*7 electricity supply, are the major factors contributing to the growth of the global solar inverter market size. Various governments worldwide are emphasizing on infrastructural development to enhance their citizen’s quality of life. For example, the UAE government is aiming at the Smart Dubai project, which focuses on transforming the city into a top global smart city. The increasing construction activities is a key driver that will augment the demand for the market. Moreover, the rising greenhouse gas effect and growing environmental concerns are the prominent factors propelling the growth of the solar inverters market share in terms of revenue. The solar inverter reduces the high cost of electricity bills and increases efficiency in the long run. Numerous stakeholders in the energy generation sector are proactively searching for opportunities to decrease carbon footprints by focusing on utilizing renewable energy sources for power generation. For example, in 2019, the Italian government emphasized touching 50GW of solar power generation by 2030 to rise the share of renewable energy sources in the nation’s total power generation. The increasing aim at renewable energy sources will further stimulate the growth of the solar inverter market. On the other hand, the constant requirement for sunlight, high initial installation cost, and the need for a large area for installation will hinder the growth of the market during the forecast period.

On the basis of Technology, the market is segmented into micro-inverters, central inverters, power optimizers, and string inverters. The central inverters is expected to increase at a faster CAGR in the upcoming years. This is mainly attributed to the high demand for energy driven by the increasing urbanization and the rising use of electricity at the global level. The central inverters are majorly used in industries, buildings, and in several field installations. These inverters provide a lower capital cost per watt, offer better productivity, and are easy to install as compared to other kinds of solar inverters. All these factors are projected to fuel the demand for central inverters.

On the basis of End Use, the market is segmented into commercial, industrial, and utility inverters. The industrial end-user is predicted to dominate the market during the forecast cast due to the increasing number of government initiatives to encourage the use of renewable energy sources for power generation. Additionally, the continuous rise in investments in the renewable energy industry will further accelerate the growth of the market.

Based on the region, Asia-pacific is projected to dominate the market over the coming years due to increasing power outages, specifically in emerging countries like China and India. In addition to this, the increasing number of initiatives, including India’s National Solar Mission, will positively influence the market’s demand. For example, NABARD allows a 40% subsidy for those who are buying solar inverters. All these drivers will pay the way for the growth of the market.

Major Players Operating in the Solar Inverter Market (Option 5: As a part of the Free 25% Customization – Profiles of 5 Additional Companies of your Choice)

GMI Research is a market research and consulting company that provides syndicated research reports, consulting services, and customized market research reports. Our reports are based on market intelligence studies to ensure relevant and fact-based research across numerous sectors, including healthcare, automotive, information technology & communication, FMCG, and other industries. GMI Research’s deep understanding related to the business environment helps us in generating objective strategic insights. Our research teams consisting of seasoned analysts and researchers have hands-on experience in various regions, including Asia-pacific, Europe, North America, and the Rest of the World. The market research report offers in-depth analysis, which contains refined forecasts, a bird’s eye view of the competitive landscape, factors impacting the market growth, and several other market insights to aid companies in making strategic decisions. Featured in the ‘Top 20 Most Promising Market Research Consultants’ list of Silicon India Magazine in 2018, we at GMI Research are always looking forward to help our clients to stay ahead of the curve.