According to a research report “Small Arms Market by End-Use Sector (Defense, Civil & Commercial), Type (Pistol, Revolver, Rifle, Machine Gun, Shotgun), Caliber (5.56MM, 7.62MM, 9MM), Technology, Cutting Type, Firing Systems, Action, & Region – Global Forecast to 2025″, The small arms market size is projected to grow from USD 8.6 billion in 2020 to USD 9.6 billion by 2025, at a CAGR of 2.1% from 2020 to 2025. Factors such as the changing nature of warfare, the militarization of police forces, the increasing incidence of drug trafficking and terrorist activities, geopolitical tensions, territorial conflicts, terrorism, and political unrest in the Middle East and Asia Pacific, rising military expenditure, modernization of armed forces, and increasing civilian use of small arms. 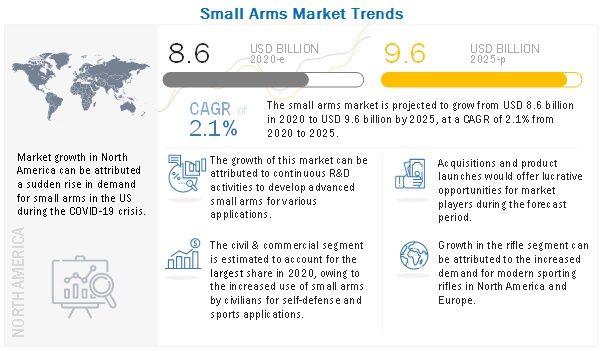 The COVID-19 pandemic has caused a large-scale impact on economies across the world as the manufacturing of small arms, components, and assembly lines have been impacted. Although the manufacturing of small arms for military applications is of prime importance, disruptions in the supply chain have set back their manufacturing for the time being. Resuming the manufacturing and demand for small arms depends on the level of COVID-19 exposure a country is facing, the level at which manufacturing operations are running, and import-export regulations, among other factors. Although companies may still be taking in orders, delivery schedules might not be fixed. Countries in North America, Europe, and Asia Pacific have maintained the current growth in defense spending during this time, contrary to countries in other regions. According to an industry expert, the demand for small arms is not expected to be affected greatly since small arms are a key component of frontline infantry.

Based on caliber, the 9mm segment of the small arms market is projected to lead during the forecast period

Based on caliber, the 9mm segment is projected to lead the small arms market from 2020 to 2025. The 9mm-based weapon is the most widely accepted small arms round for military and law enforcement applications. The 9x19mm parabellum caliber is one of the most preferred NATO-grade calibers by armed forces across the globe. Handguns used by civilians majorly chambered for 9mm, thus assisting the growth of the segment.

Based on type, small arms market has been segmented into various categories, namely, pistol, revolver, rifle, machine gun, shotgun, and others. Rifles are of various types such as assault rifles, snipers, recoilless rifles, modern sporting rifles, and anti-material/bolt-action rifles are being considered under this category. The modern sporting rifle has also witnessed high adoption in the past few years due to an increase in sporting and hunting activities. Owing to modernisation programs undergoing across globe demand for assault rifles and sniper rifles has been significantly increased compared to other small arms thus assisting to the growth of the rifle segment.

The small arms market in the North American region has been studied for the US and Canada. North America showcases the highest demand potential for small arms, primarily due to the increased defense spending countries in the region, along with the rise in incidences of gun violence, which are driving both, law enforcement as well as civilian segments to procure small arms for counter-terrorism as well as self-defense applications, respectively. The increasing popularity of sporting and hunting activities among civilians has also led to a significantly higher demand for small arms in the North American region.

North American countries are awarding a number of contracts to major players of the small arms market for the delivery of small arms, thus driving the growth of the small arms market in the region. For instance, in February 2020, FN America was awarded a USD 119 million contract by the US Department of Defense over five years for the supply of more than 167,000 M4 and M4A1 rifles. In March 2020, Hecker & Koch was awarded a USD 33 million contract by the US Army Contracting Command for the supply of Compact Semi-Automatic Sniper Systems and Squad Designated Marksman Rifles. In May 2020, Colt Canada, a subsidiary of Colt’s Manufacturing Company LLC, was awarded a contract by the Canadian Department of National Defense for the supply of 272 of the new C20 rifles.