CnTech took part in the Shanghai 2018 Innovation & Technology Fair, which was a beneficial event for us. Event continued for almost 3 days with utmost success, marking a footfall of more than 1,500 people, including children of different ages and students from various schools and universities. CNFSimulator.A320 was the main item in CnTech stall that attracts a huge crowd. On October 3rd, 2018, in the fourth day of the Shanghai 2018 Innovation & Technology Fair, Shanghai TV came to the premises and held an interview regarding the CNFSimulator.A320 flight experience project.

Many Children Enjoyed the Flight Experience

Reporters from the Shanghai TV captured the interesting scenes of people enjoying the flight simulator and children flying the flight simulator with extreme eagerness. Reporters interviewed few children who went through the flight experience project. All the children were so excited after the novel experience and added their comments to the Shanghai TV stating that this is the best experience they have ever encountered. Even though many children have flown before, no one had entered in to an aircraft cockpit and experienced the inside this close. Employees from the CnTech explained the functions of cockpit instruments and the switches. Many children were amazed with the large number of switches and displays within the cockpit. Upon teaching them the basic functions of the cockpit controls and the displayed information, they flew the flight simulator giving them a stupendous experience while enriching their ambitions. Shanghai TV reporters captured the history making scenes in their cameras. 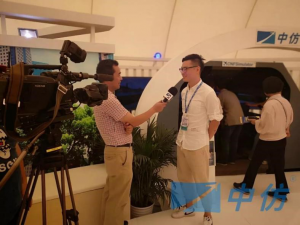 CNFSimulator.A320 as a World-class Flight Simulator

During the interview, CnTech employees explained about the CNFSimulator.A320, and why it is having the possibility to be used as the sole training partner in flight training. They further stated that, version 4.2 of the CNFSimulator.A320 has many world-class features such as, 4K immersive displays that give vivid Out The Window (OTW) depictions, coequal cockpit with the real world A320 aircraft and soft lights installed in the cockpit to light the space within it.

Focusing More on Education and Children

CnTech representatives stated our standpoint to the Shanghai TV regarding the contribution to national airlines training. We are willing to support the national airline to make their pilot training more superior. We have taken each and every measure to build and maintain a firm relationship with the national airline training wing. It is our root concept that, sharing the knowledge makes things better, so we do take every action to share our immense knowledge in flight simulators with the community. Mainly we focus on students and children as they are the best tool to convey knowledge and practices between the generations. Flight experience project which was started with the Innovation & Technology Fair will be continued for the 2019 Shanghai Innovation & Technology Fair (www.csitf.com/en/EnewLetter.aspx?id=2) as well. Our representative further stated that, we are focusing and working for the betterment of Aerospace industry by building awareness among the people mainly focusing on students and children.