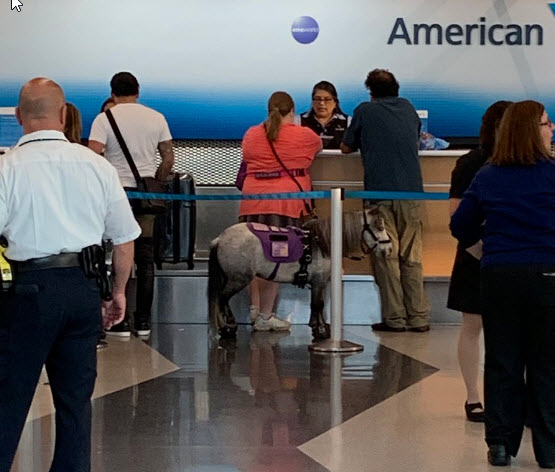 We have all seen Pigs, turkeys, monkeys and ducks have make their way into the skies to accompany their human companions as their emotional support animals. Others have been denied access to flights, including Dexter the peacock and one woman’s squirrel.

The horse caught the attention of fellow travelers who were surprised to see hooves queueing up to check-in among the usual feet and suitcase wheels.

“There was a small horse in line at the airport today and I’m curious about it,” Twitter user Amberley Babbage said alongside a picture of Flirty with Hensley at the AA check-in desk.

Hensley later posted on Instagram pictures of Flirty on the flight, including one with a group of smiling flight crew members.

“They were fantastic and kind and very excited to see Flirty on their flight! Even the pilots had to come out to say hi,” read the caption. 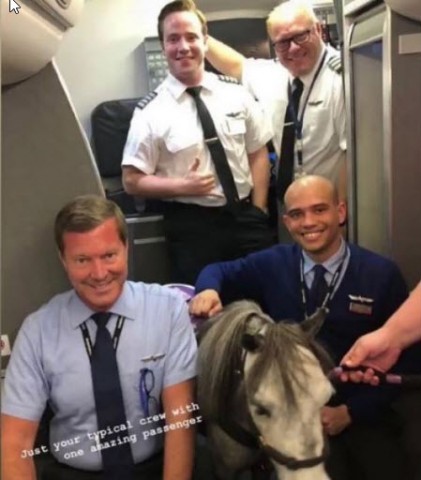 Hensley, of Bellevue, Nebraska, told local news station KMTV 3 in February that most local businesses in her home town are welcoming to Flirty. She takes the horse to the movies, grocery shopping and even to her doctor’s appointments.

Flirty, who has a popular Instagram page and Twitter account, is described by his human handler as a “psych & mobility service horse”, and according to American Airlines is in fact a trained service animal. Hensley suffers from a variety of ailments including: depression, severe anxiety, panic disorder and PTSD.