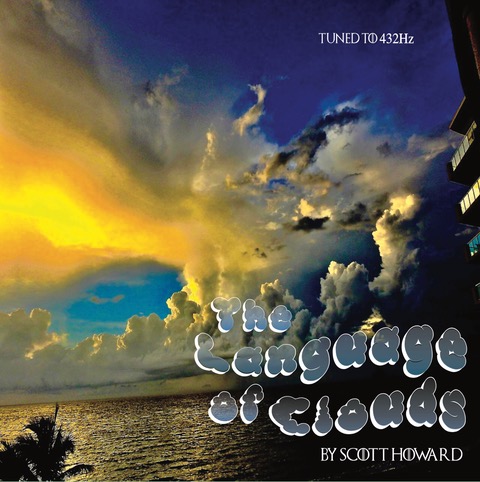 Scott Howard invites fans to join the next chapter of his spiritual journey through the 5D Cloud Realm with the release of his highly anticipated new album and similarly titled eBook “The Language of Clouds,” released today – Monday, May 11. The charming and esoteric Scott Howard continues to tap into his listeners’ minds and souls with healing sounds at 432 Hz, which is the natural frequency of the universe known to possess healing energies. Scott’s last album, “Ascended Man,” continues to be a massive success streaming 6.5 million times and counting on Facebook. Similarly, the new album “The Language of Clouds” has earned praise from critics long before its official release.

“The Language of Clouds” in 432 Hz unfolds the revelations of Scott’s 5-year awakening journey. It is an odyssey permeated with passion and enthusiasm. The first track of the album “Written in the Clouds,” opens with an angelic and celestial sounding synth accompanied by a rhythmic acoustic guitar leading to Scott’s powerful opening line: “What language do you speak when you say hello to a cloud, out loud?” The Faulkner Review described the album as “powerful spiritual message… combining the mystical introspection of Cat Stevens with the anthemic energy of Bruce Springsteen”.

Throughout his life, Scott’s experiences have defined his mission – from being a family man, to experiencing the trials of divorce and tragically losing his son, the tribulations bestowed on Howard provided him with courage, compassion and perseverance to move forward by sharing his music. Scott Howard‘s interest in philanthropic works that support children and young adults with issues of substance abuse, mental illness, fighting to end human trafficking & helping Mother Earth’s Ascension have categorized his ascension.

Scott’s poetic and well-versed lyrics have resonated with millions of listeners across the globe. His musical journey entwined with his spiritual journey as he delivers it with a unique sound using a special kind of instrument tuning, 432 Hz. Scott Howard uses this technique to spiritually elevate the listener, pioneering a new genre of music or “Source Music.”  From the confines-imposed lockdown, Scott will be taking his tour online with the “World Ascension Tour in 432 Hz” set to broadcast this summer. This virtual concert will be the first of its kind as Scott shares his “Source Music” to an audience around the globe via livestream.

A limited-edition vinyl album of “World Ascension Live at Studio City Sound” in 432 Hz will also be released along with a coffee table book, a compilation of photos taken by Scott over a 5-year exploration period of the 5D cloud realm of worlds within worlds. Additionally, Scott is also introducing his AscensioN432WeaR clothing line featuring multi-functional face shields with crystals to aid in manifestation, protection & healing.

“The Language of Clouds” is available now on all major streaming outlets: https://distrokid.com/hyperfollow/scotthoward/the-language-of-clouds-3